Insafe SDDP: Getting The Best Out Of Our Network - Action plan

This report has been developed to describe the first series of results in the context of the Getting the Best out of our Insafe Network 2007 Co-Laboratories. Co-laboratory A explored the weaknesses of the current model of interactions within the network, while co-laboratory B envisioned the ideal model of a European network of Safer Internet Nodes, and co-laboratory C generated action options to be taken to overcome the obstacles in order to achieve the ideal model of an Insafe network.

On the 6th of December 2007, half of the staff of the European network of Safer Internet Nodes engaged at Crowne Plaza Hotel in Brussels, Belgium for three hours in a structured dialogue focusing on the triggering question:


What actions can the current network of EU Safer Internet nodes take in order to reach the ideal and efficient network?

In response to the TQ, the 21 participants came up with 59 actions. The ideas were then clustered in 5 categories in an interactive manner, thus providing opportunities for further and deeper clarifications of salient distinctions between separate ideas. The ideas were clarified and discussed throughout the SDDSM, thus enabling participants to achieve a better understanding of the views of other members and greatly expand their own and others. Following the voting process, 33 ideas received one or more votes and were structured to create the influence MAP shown below. 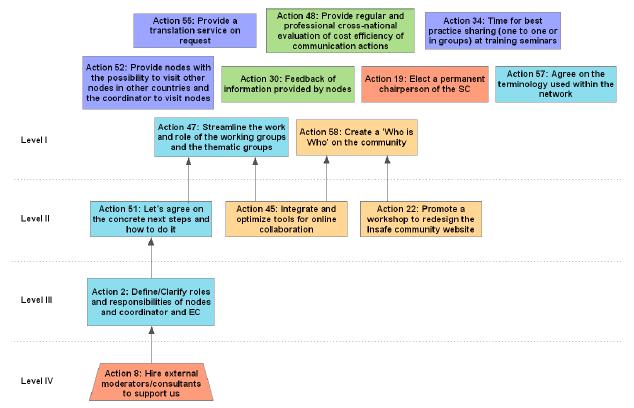 Influence tree on the actions that the current network of EU Safer Internet nodes can take in order to reach the ideal and efficient network.

The voting results were used to select factors for the subsequent structuring phase to identify inter-relations among the generated factors.

The SDDP co-laborarory was facilitated by Yiannis Laouris, Ilke Dagli, Tonia Loizidou, Elia Petridou, Tatjana Taraszow and Kerstin Wittig. The workshop was attended by 21 participants from all over Europe.
In sum, the participants of the dialogue reported their satisfaction that their voices have been heard and documented and communicated their expectations for follow-up activities to address the diagnosis of their needs.