The Employers and Industrialists Federation Award recognised the inspiration and development of the creative CYBER KIDS curriculum (research and development conducted by the Cyprus Neuroscience and Technology Institute) and its application internationally (by MISnTED Ltd.)

Anecdotally, the American Ambassador smiled and looked at President Clerides, stating "I am glad that Cyprus recognises and honours innovation the way we do", under striking the fact that CYBER KIDS was honoured two years earlier in the USA winning the Silver Medal of Innovation at the INPEX 1996 Innovation Fair in Pittsburgh. 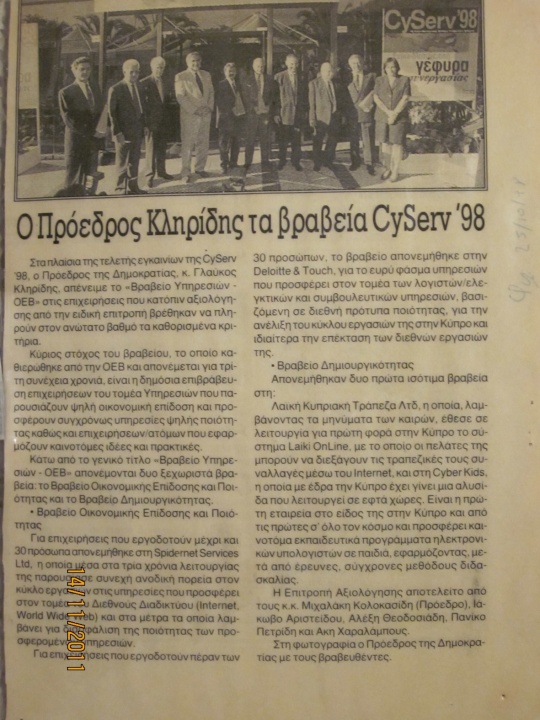 The Cyber Kids Curriculum has been developed by the Curriculum Development Unit of the Cyprus Neuroscience and Technology Institute under the leadership of Yiannis Laouris with significant contributions of Harry Anastasiou, George Vakanas, Maria Symeonides, Dinos Georgiades, Pantelis Makris and many others.

The Cyber Kids Curriculum has been applied by the Cyber Kids Chain of computer learning centers. In Cyprus, more than 15,000 children (approximately 10% of the country's children population) and 10,000 adults have benefited.

Legend to Photograph: Dr. Laouris in the middle. To his right is Ambassador Baucher. Third from the right is president Clerides.