On the 12th and 13th of November, 2012, the Q3.eu Project partners used the Structured Design Dialogue Process (SDDP) during the “Q3 project” meeting, which took place in Nicosia, Cyprus. The main object of this co-laboratory is to address the characteristics that could assist a Social Economy Enterprise to achive its mission in a sustanaible way. The SDDP is a technique that facilitates dialogue by engaging all stakeholders in a democratic manner. The primary aim of an SDDP co-laboratory is to achieve consensus regarding actions for improvements, based on a shared understanding of the current situation. The process is designed in such a way as to harness the collective wisdom of all participants. In an SDDP co-laboratory, the participants are the experts whose shared knowledge is extracted and then used to generate influence maps between separate ideas. Ten participants offered 32 responses to the triggering question.


What are the important characteristics that could assist a Social Economy Enterprise to achieve its mission in a sunstainable way?

After having generated, clarified, and clustered the ideas, each participant chose five factors that they thought were the most important. The voting results were used to select factors for the subsequent structuring phase to identify inter-relations among the generated factors. Participants managed to structured 9 factors during the time available.

The following Figure which is considered ‘Q3 – Root Cause Map’ shows the resulting influence tree map.The 9 characteristics were structured within four levels and are related according to the influence they exert on each other. Those factors that appear lower in the Root Cause Map, hence are positioned at the root of the tree, are more influential in terms of influence than those at higher levels and are the ones to tackle preferentially. 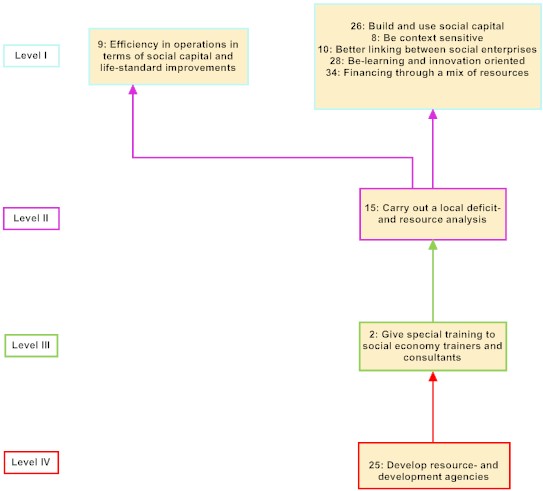 According to the participants of this workshop, the characteristic appear to be the most influential was:

The dialogue made it possible for the participants to identify important characteristics that could assist a Social Economy Enterprise to achieve its mission in a sunstainable way and draw distinctions between fundamental strong leverage inhibitors at the bottom of the Root Cause Map and symptomatic inhibitors along the branches of the Map.