HasNa Inc. headed by Mrs. Nevzer Stacy has funded an exchange program for young journalists between 1 June, 2002 and the 31 May, 2003. Five Turkish Cypriots and five Greek Cypriots had the opportunity to benefit from a short-term scholarship and spend a couple of weeks in Washington DC, hosted by American Families. Yiannis Laouris from the Cyprus Neuroscience and Technology Institute together with his peace friend from the Cyprus Conflict Resolution Trainers Group Huseyin Gursan of the Youth Centre coordinated the project. The highlight of the project was the organization of the HasNa Media Symposium May 2003.

The Parties have agreed to promote peace and reconciliation activities in Cyprus through the introduction and initiation of a series of specific collaborative projects for young Turkish and Greek Cypriots living in the Southern and Northern part of the island. During this first stage, the focus would be on young journalists. The following were defined as the tasks:

Originally George Tziapouras and later one of the scholars, Synthia Pavlou coordinated the meetings and the organization of the activities.

Members of the Advisory Board

The project was monitored and supervised by an Advisory Committee which also served as ad-hoc selection committee. The following served as members of the Advisory Board:

Members of the young journalists

Background and justification of the project

In 1995, the Cyprus Fulbright Commission, in collaboration with the Cyprus Conflict Resolution Trainers Group, organized and funded a U.S.-based training program for about twenty young journalists from both communities in Cyprus. In 1996, the U.S. Embassy funded a one-day trip to Brussels for prominent chief editors from various Cypriot media organizations, where they received up-to-date information regarding EU regulations, challenges and opportunities in the field of journalism. While both of these projects helped to form linkages and friendships between colleagues working across the Green Line, neither included any defined structures or follow-up activities to support continued interaction and collaboration among the journalists after their return to Cyprus.

The goals of the training program were defined as: 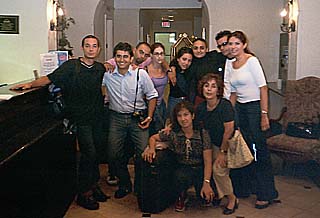 Upon their return in Cyprus, the group made a commitment to continue to meet regularly once they returned to Cyprus, to form an electronic discussion group to support one another and to organize small bicommunal activities. HasNa provided funding for two project coordinators, one in the North and one in the South, for a period of nine months (through May 2003) to support the follow-up activities. Patricia Scheid, Executive Director of HasNa Inc. served as the liaison from the US side.

During this period, the members of the group:

In sum, the HasNa Young Journalists Project was specifically designed to put a more defined post-training structure in place than had earlier projects targeting journalists. The follow-up phase was critical to sustaining the "transformation" of the participants and their regular interaction, evidenced by the regular bicommunal meetings, the publication of the HasNa Journal, and a very active online discussion group.

HasNa Inc. estimated the total tuition cost to be $6,670 per participant. Sponsoring organizations provided $2,345 per participant to cover the cost of airfare, lodging and meals, visas and medical insurance. HasNa Inc. paid the remaining $4,325 covering all tuition and other program costs.