This report has been developed in the context of the CARDIAC project (FP7 - Coordinating Action: Grant Agreement 248582). The CARDIAC project aspires to develop a series of roadmaps for future research and development in the area of accessible and assistive information and communication technology systems by inviting relevant stakeholders and experts from across Europe to participate in three Structured Dialogic Design Processes.

The Triggering Question (TQ) was
What research actions should be supported to exploit emerging network infrastructures and services to facilitate eInclusion?

In response to the TQ, the 22 participants came up with 93 actions. The ideas were then clustered in 17 categories in an interactive manner, thus providing opportunities for further and deeper clarifications of salient distinctions between separate ideas. The ideas were clarified and discussed throughout the SDDSM, thus enabling participants to achieve a better understanding of the views of other members and greatly expand their own and others. Following the voting process, 54 ideas received one or more votes and were structured to create the influence MAP shown below. 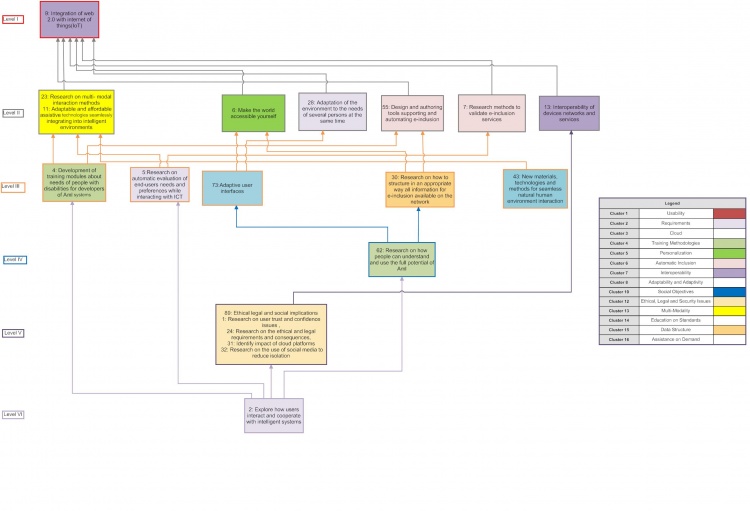 Influence tree on the actions that should be supported to exploit emerging network infrastructures and services to facilitate eInclusion.

According to the participants of this workshop, the characteristic appear to be the most influential were:

The SDDP co-laborarory was facilitated by Yiannis Laouris (CNTI) and Marios Michaelides. The workshop was attended by 22 participants from all over Europe.
In sum, the application of the SDDSM process supported the Consortium to identify potential research actions that could be supported to exploit emerging network infrastructures and services to facilitate eInclusion.

The workshop was facilitated by Yiannis Laouris and Marios Michaelides.