The Nicosia Local Mobilisation and Mutual Learning (MML) Workshop entitled "Tourism provides income but also destroys the values that brought it to Cyprus – How can we preserve both?" was organized by the CNTI and XPRO Consulting Limited (XPRO) in the context of the project MARINA, funded by the European Union’s Horizon 2020 Research and Innovation Programme, on November 22-23rd 2016 in Nicosia.

The workshop is one of the 34 European MMLs that will be conducted by the MARINA project partners all over Europe, as well as the first of two local and one international that will be conducted in Cyprus in 2017/18. The goal of the MML workshops is to create common visions, engage stakeholders to decide on common action plans on important marine issues related to the European Blue Growth Strategy, which will be exploited as policy recommendations on a national and European levels.

The Cyprus MML brought together seventeen (17) representatives from the marine and tourism related public and private sectors, NGOs, citizens and local authorities interested in issues concerning Sustainable Tourism in Cyprus.

The MML Workshop was realized using the Structured Democratic Dialogue participatory methodology to examine different perspectives and to decide with concrete action of how to preserve Cyprus’s marine and coastal heritage and at the same time improve its tourism industry.


"What actions (Political, Economic, Social/Cultural, Technological, Legal and Environmental) are necessary to ensure that Cyprus lives in prosperity benefiting from sustainable tourism and at the same time preserving its tangible and intangible marine cultural assets that attract its tourism?"

In response to the TQ, the 17 participants came up with 53 ideas, which were categorized in 10 clusters. Following the voting process, 25 ideas received one or more votes and were structured to create the influence MAP shown below. 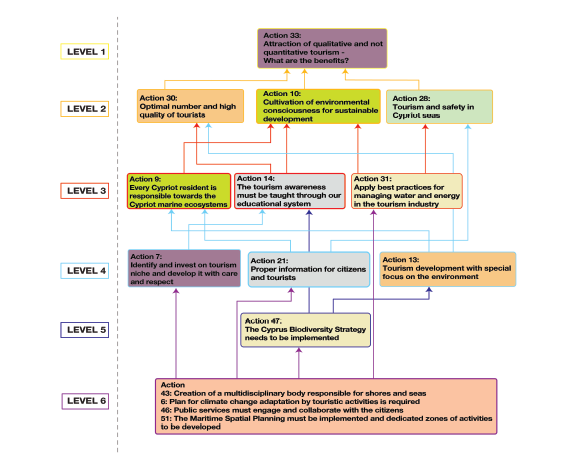