The Sixth International International Art Camp was held from August 2-17, 2007 in Kosjerić, a small town in Western Serbia. Since the community is ethnically homogeneous, the intention was to get as many nationalities as possible to meet the locals. The camp provided an opportunity for about 70 participants from Kosjerić and abroad to take part in a multimedia art colony with four workshops. Some 30 young artists from 13 countries (Belgium, Croatia, Denmark, Greece, France, FYR Macedonia, India, Italy, Russia, Serbia, Slovakia, Spain and the United Kingdom) volunteered in the camp. They stayed with 25 host families from Kosjerić.

The Music Workshop combined different methodologies in order to create a specific final event. Because all the participants were very good musicians they could work on a very high level, improvising and using a variety of music styles (jazz, ethno, classic, rock) in the orchestration of different songs ranging from Russian ethno songs to jazz standards. By using some theatre-based elements they added a completely new value to the final concert. The musicians made a whole show out of the concert using movement, dance, light and dark, poems and speeches in harmony with their music. During the concert they used ethno singing from different countries in combination with jazz standards.

The Theatre Workshop used different working methods of the Theatre of Movement and Nonverbal Theatre. The participants didn’t use any language but tried to express themselves only through acting, movement and dance. The choreography was based on the participants’ backgrounds and individual experiences. On the very first day of work all the participants agreed to call their play a “Common Difference”, so they combined their short individual and small group plays to one whole performance, paying attention to express their differences and common interests.

The Children’s Workshop used music as an inspiration for the basic text of the play. During the first sessions, the children just listened to music with their eyes closed and imagined the stories. Then they expressed their thoughts and feelings, and, with the help of the workshop leaders, chose which material to put into the play. The result was a very complex story. The children were assigned different parts in the play and practised their text and choreography. They also designed and made their costumes themselves. 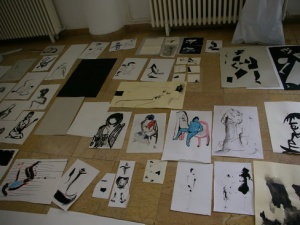 The Contemporary Art Workshop focused mainly on producing contemporary drawings and exploring abstract expressions in visual art using examples from the end of the 20th and beginning of the 21st century. Based on that, participants were presented with different methods in approaching and achieving contemporary works of art. Team work was a key element for reaching decisions. Everybody made suggestions and thus improved the others’ work in progress. Moreover, the group spontaneously explored topics that came up accidentally and modelled them into a simplified shape which was then included in the story of today’s art. Works were showcased daily at public programmes, international evenings, street carnivals, musical evenings, etc. Each workshop created a rich and interesting final programme which was presented on two evenings in Kosjerić and Belgrade (attracting around 1,000 visitors).

Music as a leitmotif The programme of the camp also included several social events which were of the utmost importance for the intercultural exchange between the participants and the local community. Music was a leitmotif of these programmes in several ways. Two concerts and a jam session were organised. A jazz concert by the band Jet Clock from Belgrade was organised for a young audience in one of the most popular cafes in Kosjerić. After two hours of great music this concert finished as a jam session when some of the camp participants brought their instruments and joined the band, playing jazz standards and improvising.

Then a concert by the band Obojeni Program was organised at the public square in Kosjerić, attracting an audience of around 700 young people from Kosjerić and the surrounding areas. With its strong antiwar messages this underground band had marked the previous decade in Serbia. During the camp a jam session was also organised in Breza, one of the most popular cafes. This was a good opportunity for local youth bands to perform together with their foreign guests. 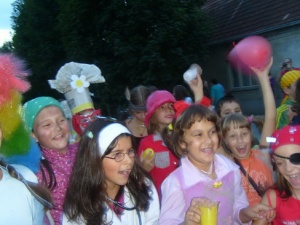 A street carnival with masked participants gave children and parents from Kosjerić an opportunity to join a parade with live music, percussions, fire works, clowns, etc. And at an international evening each country presented itself to the citizens of Kosjerić with its food, music and dances.

Excursions to surrounding areas were organised in order to better acquaint the participants with the culture of Serbia – a tour of Guča (where the world’s largest trumpet festival takes place), a trip to another art camp in Užice (also of international character), a visit of the Caves of Potpećka, and the village of Skakavci.

Radio Kosjerić regularly presented the work in the camp in its daily programme. Apart from the local media, TV Metropolis, TV Studio B, TV B92, Radio Belgrade 1, Radio and TV Požega, Radio Užice, Radio 202, as well as the daily newspapers Blic, Politika and Danas reported on the Camp.

A new brand of the region

Over the past six years the International Art Camp in Kosjerić has become a characteristic brand of Kosjerić and Western Serbia. Many local young people heard of it and decided to take part in it. From some countries we also get a lot of participants every year. Several volunteers came for the second or third time. That’s how they are able to build very strong friendships with local youths.