Addressing Racial, Economic and Educational Inequalities through Our University Network

The Co-Laboratory to “Address Racial, Economic, and Educational Inequalities through Our Uni- versity Network“ was organized by Future Worlds Center and Innovative Compliance Europe Ltd on behalf of the OSUN Hannah Arendt Humanities Network. The methodology utilized to facilitate the Co-Lab was the Structured Democratic Dialogue process, supported by specialized tools1. The Co-Laboratory was held as a series of online virtual events during March 2021. Eighteen ac- ademics and students from eight OSUN Universities and Colleges came together to propose ac- tions that could be implemented either locally or through OSUN to improve educational access for disadvantaged students. The participants came from very differing cultural, economic, and societal backgrounds across OSUN, and included academics and students, with equitable cross-gender distribution. The participants represented both OSUN founding institutions (e.g., Bard College and CEU) and a broad cross section of European (Bard Berlin, American University in Bulgaria) Middle Eastern (Al-Quds Bard) and Asian (BRAC University, American University of Central Asia, Kyrgyz- stan) OSUN members. Two participants were OSUN students who reside in refugee camps. During the first online Co-Laboratory session, many of the OSUN students commented, even before introducing themselves to the group, that they wished to thank Bard College Hosts for providing this opportunity for their voices to be heard on this important subject. In the participants surveys OSUN students highlighted the importance they attributed for their ideas and their clarifications being treated as equally important to those from the Professor and Lecturer participants. The ex- tremely high level of response in two Co-Laboratory participant surveys was unprecedented.

To facilitate the dialogue process, a Triggering Question was formulated as “What initiatives/ac- tions could the communities of faculty/staff/students around the Open Society University Network take that would contribute towards narrowing racial, economic, and educational inequalities?” The Triggering Question and the goal of the process were communicated to all participants one week before the initial online Co-Lab virtual session. In response to this question, the participants put forth 40 proposals of initiatives/actions capable of addressing the challenge. Using a bottom-up clustering approach, the participants identified 10 “dimensions”. Community Building was the most common dimension that appeared in 8 actions, to be followed closely by Funding and Schol- arships and Accessible Education (each with 5 actions). Raising Awareness appeared in 4 actions closely followed by Admissions and Outreach, Educational Resources and Support, Democracy, Advocacy and Human Rights, and Employment Opportunities each of which appeared in 3 actions. Following a selection of ideas using preference voting, the participants used Interpretive Structural Modeling to explore whether one idea could support another, thus constructing a tree of influences. 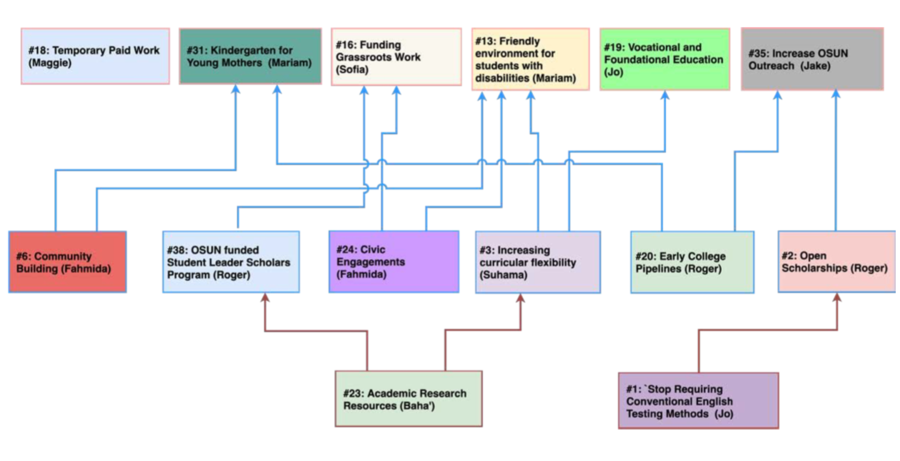 Influence tree 2 from the Option SDDP of the OSUN Co-Laboratory.

Out of the 40 ideas generated, the influence tree revealed that those that one should give priority (because they leverage on others) included projects, proposed by students themselves, that would directly benefit disadvantaged students and that could be implemented rapidly and at low cost:

The “Academic research resources” proposal addressed the lack of availability to disadvantaged students of many of the academic resources open to students at the founding OSUN institutions. Individual colleges in many countries may face issues relating to library and administrative logistics and/or cost. This idea proposed that OSUN make the same level of educational resources at the Central European University available to all students in the Network. The proposal requesting the removal of IELTS, GRE and other entrance testing methods for OSUN candidates was based on the belief that such entrance testing methods put additional and unnecessary difficulties in the way of disadvantaged students wishing to apply to OSUN. The next set of proposed projects were predominantly proposed by the academic participants. They include topics that could increase the attractiveness of OSUN education to a wider group of cohorts, but would be more costly to implement and included:

The ideas that made it to the final phase were scored for Impact, Feasibility, and Probability of happening without intentional intervention. Ideas with a significant impact but low probability to be implemented without active intervention should be given priority.

The analysis pinpointed to:

When the perceived feasibility was also taken into account, the analysis indicated that:

The key conclusions of the Co-Lab were:

Ample proposals Effective actions The participants have generated 40 proposals for initiatives or actions that in their opinion can narrow the racial, economic, and educational inequalities in the OSUN network The exploration of how the implementation of one proposal could support another, helped the participants to agree on which actions should be ad- dressed first, based on the leverage they provide to the implementation of others. They learned how to apply SMART criteria to make their proposals concrete, measurable, assignable, relevant, and time-bounded. Finally the participants scored those actions that made it to the Influence Maps for im- pact, feasibility and probability of happening without intentional intervention. This resulted in concrete recommendations for acting on those that have high leverage, but also are reasonably easy to implement:

More than two thirds felt (scores 4 & 5) that their understanding of Racial, Economic, and Educational Inequalities within OSUN was improved during the Co-Laboratory; their level of confidence in presenting their ideas publicly was boosted; the experience of students co-constructing knowledge and action plans with professors in a democratic environment and on equal foot- ing meant a lot; and, the opportunity to present their ideas and provide pro- and against arguments on different opinions, was an empowering process. The incidence of genuine dialogue between the participants was expected to be somewhat limited by the constraints of the virtual process. Offline interac- tions, however (e.g., when participants were encouraged to work together to comment on and enhance the clarifications of each other’s ideas shared in a cloud document) facilitated additional reinforcement. The final Co-Labora- tory participants evaluation indicated that more than two thirds (with scores 5 or 4) reported that they felt comfortable taking the workshop online; the “offline effort” (in the weeks between Zoom sessions) was acceptable”; the final outcome authentically recorded their contributions ; the final MAP was considered to “shared” amongst all; and, the conclusions and recommen- dations represented their own and were tangible and actionable.

The full report can be downloaded from [[Media:| here]].

This Co-Laboratory was sponsored by a grant provided to Future Worlds Center by BARD College and Open University Network through the initiatives of Marcus Hallside.