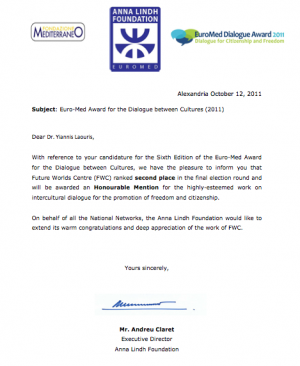 Official letter about the award

People who can claim ownership of this award

Primarily, the members of the Board and relevant advisory boards may claim credit for this award. But also all members of Future Worlds Center involved in the activities for which the award was given may mention this award in their respective CVs as a collective recognition of their work and contributions.

The nomination was done by Heiner Benking from PNW [4], a member of the German Anna-Lindh-Network [5], and co-foundner of the Anna-Lindh-Salon. [6] He based his proposal on the following: