Concert in the buffer zone Nicosia

For the purpose of Everybody’s Song project, the Cyprus Youth Council organised a concert with traditional Cypriot music performed by young people for young people on 24 March 2008. The message we wanted to get across is that music unites. It can bring together people of different backgrounds, with different interests, different lifestyles and different conceptions to play music and to listen to music. Music with different special features, but in any case with one soul. Just like people. This concert gave a new dimension to traditional Cypriot music. Traditional songs were played in different versions, e.g. jazz, classic guitar, rock and ethnic. We believe that even traditional songs can be songs of the world. Four bands with different styles were chosen to perform the traditional music of Cyprus, the Balkans and the Mediterranean region in their own way. The first band consisted only of guitarists, the second was a Turkish Cypriot music group that studies and plays Cypriot folklore music, the third deals with sounds of the Mediterranean and ethnic music in general and the fourth plays jazz. Greek Cypriot and Turkish Cypriot musicians played together. The concert ended with the song "Apo xeno topo/Üsküdara gider iken/Yasen Mesec” being sung in Greek, Turkish and Bulgarian by some musicians together with participants of the project. 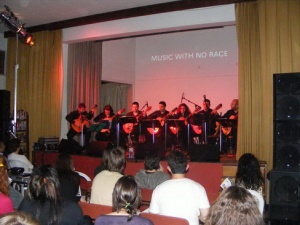 In order to make it easier for people from both sides of Nicosia to come and watch, the concert took place at the buffer zone which is under UN control. It was unexpected and really amazing that so many people (between 200 and 250) gathered together and attended the concert. After the concert traditional Cypriot food and drinks were offered in the yard of the theatre. The reception was supported by the Municipality of Nicosia. 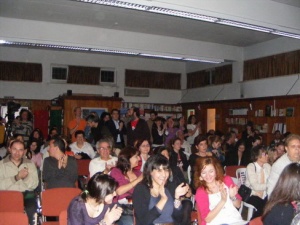 We really did not believe that the concert would be so successful. This event differed from others in its uniqueness: Never before had there been a concert of this kind in Cyprus, mixing such a large variety of sounds and music of the present with those of the past. It was the first bi-communal concert organised by and referring to mainly young people. Moreover, it was one of the rare times that such an event took place within the buffer zone, showing that we are looking for a common ground of peace and understanding. For all these reasons both the participants and the audience enjoyed the concert and shared messages and values!

The songs performed in the concert were traditional Cypriot songs, songs of the Balkans and other Mediterranean regions.

The Cyprus Youth Council also produced a video which was shown on a big screen at the concert and on TV. The video can be found here and on the project’s DVD. Its message is: “Music with no face; music with no race; music with no colour; music with no age; music with one soul.” The video consists of five scenes repeating the same “ethno” tune familiar in Cyprus. The first four scenes show close-ups of four different musical instruments playing the same tune (and being played by four different people). At the end of each scene the music stops and the camera shot changes from close-up to figure shot displaying one specific part of the main message (e.g. “music with no race”). Finally, the fifth scene (“music with one soul”) integrates the first four scenes into one, showing close-ups of all four instruments playing the tune together.