The Action Groups were created during the last day of the Structured Dialogue Workshops in Larnaca Cyprus. Having discussed potential actions, which would help ‘break’ the Wall of Obstacles and would bring the participants closer to their joint vision, the participants concluded with four categories of actions. The categories are: The multi-stakeholder Action Groups emerged around these four categories, each group consisting of both Israeli and Palestinian participants, who were enthusiastic about working out an action plan in the said category. The participants chose to separate into 4 groups with different categories about the actions in which they believe are needed. The categories are Business, Non Formal Education, Women, Students.

Business: This action group focuses on the business aspect; their target is to open a center of both Israeli and Palestinian businessmen who can openly work with the Arab countries, Europe and the States. The main point they agreed upon was to focus on marketing strategies that will open the markets between Israel and Arab countries, and to open the markets of the west, Europe to the Palestinian side. This action group believes that they can create jobs this way and they focused on mutual agreements and programs in order to create mutual basis of understanding. Other ideas include to find a way to produce and export things together; the support by the Israeli side to the exportation of Palestinian products; and to create a group of people, students, economic organizations who would be interested in this program, which will result in creating positive public relations and increase the marketing possibilities. The target is to achieve these goals and then the corporation itself be able to overcome all the difficulties that exist for exporting and getting products across the checkpoint, and when this finally comes through then this will build trust and create jobs.

Non-Formal Education: The entire group has experience working with youth. The goal is to begin with trainings, first in their own region and the jointly on both sides. This event will include also social activities and a seminar.

Women: The women view women as leaders in society and leadership in the field of education, so they thought to create a model of twinning’s schools. The twinning model means that all people involved, the school students, the teachers, the principal, and the parents know that this includes introducing certain things from each side. The first step is to find an elementary school, and start the process with the principal so that they commit to the process. Then they will have a meeting with the teachers about social issues and education and the problem of education in the two societies and about the two cultures of the communities. From these meetings they will develop a team of Palestinian and Israeli teachers. Each team will follow a certain process, and each teacher will have activities for the pupils that will teach them the cultures, sports, arts of the other community. Their goal is to try to touch 3 target groups: teachers as leaders in the field of education, pupils; 30 pupils in each class and the third group will be the parents who are related to their community. Then at the end of the process all the groups will convene for a big festival. They haven’t decided yet the exact content to include, but the target is to create a role model of corporation between two schools and each pupil in these schools will know that their school cooperates with another school whatever their political opinion is.

Students: This group decided to talk about creating a program between two universities in Jerusalem. They did not decide on the specificities but agreed it will be about cultural issues, religion, language and other. The aim of this program is to engage young Palestinian and Israeli students and to raise a generation that cares about the “other”. A generation that cares about the others’ culture, issues, and has the opportunity to get to know one another. The course will take place over three months, throughout the duration of a semester. Israeli and Palestinian students and professors will have the same content and the same curriculum. This idea is directed towards the obstacle of prejudice that Israelis have towards Palestinians and Palestinians have towards Israelis. 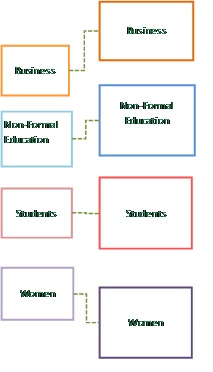