Everybody is dancing Struga, FYR Macedonia

The exchange that Tanja mentions here is an event with 38 participants that took place in Struga, FYR Macedonia at the end of June 2007, in the framework of the large scale project “Everybody’s Song”. Along with friends from Albania, Bulgaria, Slovenia and Serbia we (YFE) decided to organise this exchange under the name “Everybody is dancing”. Through this gathering we wanted to present to each other, as well as to the local community of Struga and the local communities of the groups that were present how cultural heritage can be a link for cooperation and understanding, “even” for people in the Balkans. 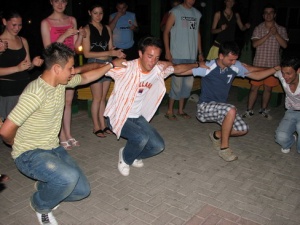 Each national group invited youngsters that have at least some basic knowledge of folk music, dances and singing to take part in the international group. This international group made a performance in the beach park of the hotel where they were accommodated, in front of roughly 70 spectators from Struga and tourists

The event was filmed by a local TV station (TVM from Ohrid that covers Ohrid and Struga) as well as by Radio Struga. Both stations sent reporters and interviewed some of the participants.

The performance that was rehearsed during the entire stay in FYR Macedonia included a combined dance with elements from all countries involved. This symbolically presented cooperation in harmony among the nations as well as overcoming cultural and ethnic differences through learning from each other as a part towards progress in the region and in general.

While preparing for the final performance, the group rehearsed a lot. All participants had the opportunity to learn dances from each of the other countries but also to teach the others one’s own national dances and traditions. Apart from the dances the participants had National Evenings where they presented traditional foods and drinks to each other and learned songs. We used a lot of workshops where we engaged in and supported a process of intercultural learning, through which the youngsters from all five countries got to know one another. We literally made one compact group out of five groups at the beginning. The fact that the participants and their group leaders were more than open-minded, flexible and willing to learn from each other made the process of cohesion among the participants far more natural and thus the facilitation process far “smoother”. 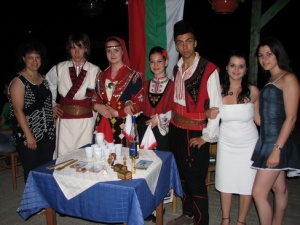 The participants had a free day in Ohrid and in St. Naum Monastery. In the morning they all went to Ohrid and visited important historical sites where they were introduced to fractions of the ancient Macedonian history. The day continued with a boat trip to the monastery on the other side of the Ohrid Lake. On this short cruise the youngsters had the possibility to see a good part of the beauties of the Ohrid region.

Overall this project was a great experience for all of the participants as well as for the organisers. The contribution of the final outcome to the project “Everybody’s Song” was a practical presentation that cooperation among the nations in Balkans is possible, that we all do respect our cultures, habits, dances, traditions and history. We also have quite a lot of common points and this is more than a solid ground for common activities and initiating and implementing projects together.