At the beginning, it was just an idea – a youth exchange with activities organised by young people for young people. Then we (members of ESYN, the Hellenic Youth Council) were inspired to organise a summer camp for young scouts from the Balkan region with one aim: the youths of our region to meet, interact and explore the different yet so alike cultural elements of a heritage that unites us all. Motivated by the mission of scouting to create a better world, we successfully passed our inspiration to friends from the Balkans who agreed to join us in our journey of celebrating diversity and promoting intercultural learning. The project was indeed ambitious and the challenges numerous. Having to cooperate with project team members and national coordinators and at the same time dealing with issues of programme structure and flow, transportation, accommodation and catering was definitely a full-time job. The pressure of hosting such an event became part of our everyday life and things did not always work out as planned. However, even when we felt lost in long meetings, endless conversations and hours of work in front of computer screens, we still had our common goal, our personal compass, to keep us going. 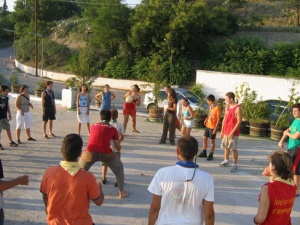 From August 20th to 22nd 2007 the 1st South-Eastern Europe (SEE) Jamboree became the realisation of our idea and hard work. Twenty-four scouts aged twelve to fifteen and seven national coordinators from Bulgaria, Greece, Montenegro and Romania started their own journey of fighting racism and discrimination. The city of Thessaloniki, the second largest in Greece, was the participants’ meeting place and music the communication tool in their intercultural dialogue. Our event was hosted at a scout campsite located in the Municipality of Kalamaria (close to the city centre of Thessaloniki). Daily activities included a bit of everything – ice breaking games to get to know each other, interactive games using music as a presentation tool along with music games from each participating country and other activities aiming at intercultural learning. In taking active parts in this event participants had the opportunity to perform their countries’ folk and national scout songs, cook traditional food and sweets and dance traditional dances, in some cases even wearing their national costumes. Additionally, the four groups had the opportunity to visit the centre of Thessaloniki (the White Tower – Lefkos Pyrgos, the Church of Saint Demetres – the metropolis of Thessaloniki, the Great Walls of the city, an outdoor fair - panigiry) and went on a guided tour of the Folklore and Ethnological Museum of Macedonia and Thrace, which contains a collection of 15,000 traditional objects, including musical instruments, folk costumes and a sound library. Part of the activities was the screening of Adela Peeva’s documentary “Whose is this song?” which gave the participants some food for thought, namely to elaborate on all common cultural elements of the Balkan nations that can bring us together and at the same time keep us apart. 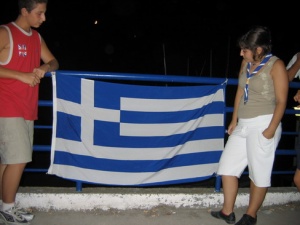 Participants played an active part throughout the event as they were invited to express their ideas, share their thoughts, take up roles and experiment with their identities. Hence, the young people from Bulgaria, Greece, Montenegro and Romania had the opportunity to have an intercultural learning experience based on exploring cultural diversities, discovering similarities and celebrating differences. On our way back home we didn’t forget to put souvenirs and gifts from the camp in our backpacks. But we also kept a special place for the joyful memories, life’s lessons and new friends we made during this event. 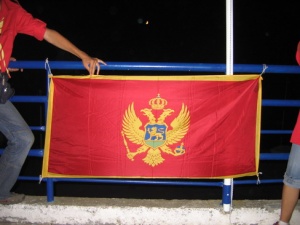 The 1st SEE Jamboree eventually came to an end but our journey in promoting the ideals of equality, tolerance and diversity has just We will keep our voices up via the Internet–based radio station of the Greek Scouting Body. Starting in September 2008, young people aged mainly sixteen to eighteen will have the opportunity to send the message of world peace beyond borders from the fourth floor of the Central Scout Offices in Athens. Such initiative is intended to set the basis for the cooperation between the Greek Scouting Body and other Scout organisations based in Greece (e.g. Armenian and Egyptian) and to work as a tool of intercultural learning during the centenary celebrations of the Greek Scouting in 2010.