The workshop, which was realised using the participatory methodology of the Structured Democratic Dialogue, brought together XX experts from the .

Triggering Question (TQ) of the workshop

In response to the TQ, the participants came up with 38 factors.

Following the voting process, twenty nine (29) factors received one or more votes, which translates to a percentage to 72% ST. The participants structured 10 factors using the computer-assisted approach.

At the end of an about 90 min-long mapping session, the participants managed to structure all actions that had received 3 or more votes. The influence relations between those ten actions are shown in the Figure below.

The obvious characteristic of the MAP is that it features two pathways, but both pass through Action #17: Building Future Finance Poland Lighthouse. Examining the root of the MAP, we observe that Action 37: Map all available research and analytical resources and ongoing operations supports only the left pathway; i.e., through Action: 8: Partnerships with other Financial Centers throughout the world, it supports Action:17, which in turn supports all actions lying above it. On the contrary, Action #36: Business service centers as part of a successful FFP structure, supports both the left and the right pathways. 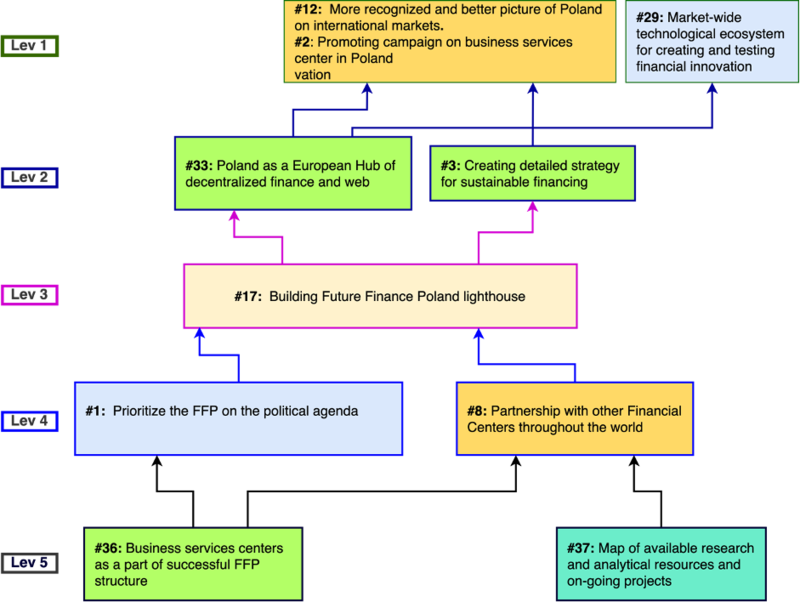 Influence tree from the ideas generated at Towards the identification of ...

The most striking characteristic of this MAP is that Action 17 appears to be an instrumental, intermediary step that provides support for the implementation of the actions that lie at the top of the MAP. Typically, the top of the tree structure is populated with ideas that pinpoint towards ultimate goals of a strategy; i.e., they are more visionary. In this case, we have:

Following the 90-min formal structuring session, the facilitators have asked the authors of the actions that have received 3 or 2 votes to take the printouts of their ideas from the wall, to go and stand in front of the MAP that has been reconstructed at another place in the room, and discuss with the rest of the group whether that particular action can be placed at some location within the existing structure. They formed a group standing in front of the re-created map in a wall and structured a total of 19 to create the influence MAP shown below. 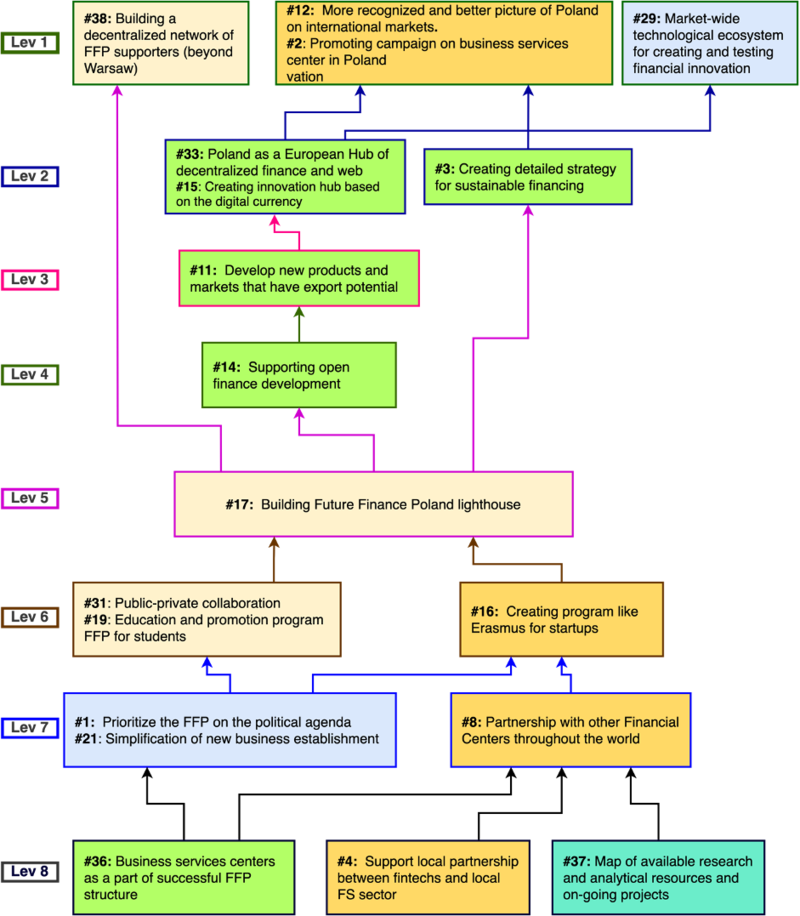 Influence tree from the ideas generated at Towards the identification of ...

This step was less formal, and the outcomes were not grounded on strict majority voting as in the previous step. The justification for such a “manual” continuation of the mapping step is that participants have already understood and internalized the use of transient logic and of influence relations, and they are therefore in a good position to make such “surgical” insertions to the MAP. The resulting MAP is shown in Fig. Y. The new MAP is different from the original in the following ways:

1. A new Action at the top
Action #38: Building a decentralized network of FFP supporters (beyond Warsaw) has been inserted at the top of the MAP. As explained above, ideas at the top are typically more visionary and their implementation requires support from other actions. The participants justified the placement of action #38 at the top because they agreed that it would be easier to implement once Action #33 is implemented.

2. A new Action at the root
The participants inserted Action #4: Support local partnerships between fintechs and local FS sector at the root, supporting Action #8. In other words, they looked at Action #8: Partnership with other Financial Centers throughout the world, and agreed that Action #4 could significantly support it.

3. Two new levels added
Probably the most interesting outcome of the follow-up manual mapping is the fact that the participants have created two new levels to the MAP, one below and one above Factor #17, which continues to stand out as an important intermediary step. Action #31: Public-private collaboration and Action #16: Creating a program like Erasmus for startups were inserted below Action #17. Action #11: Develop new products and markets that have export potential was inserted above Action #17 and below the actions that made it to the top of the tree.