TThe Mutual Learning Workshop "What are the best practices to overcome problems, barriers, issues when implementing your GEPs?" was organised virtually (Due to the Covid-19 pandemic and the consequent sanctions and difficulties in traveling abroad, the consortium of the project decided to deliver the workshop virtually) over 4 sessions using Zoom on the dates shown below. The Greek partner, ISOTITA has sent the invitation 6 weeks before the event to many national, some international and all partners.

Yiannis Laouris, from the Cyprus Neuroscience & Technology Institute (CNTI) has served as the Facilitator. in the context of the project R&I PEERS funded by the European Union’s Horizon 2020 Research and Innovation Programme,

The workshop, which was realised using the participatory methodology of the Structured Democratic Dialogue (SDD), brought together fifteen (15) experts from the gender equality field representing universities, governmental and scientific bodies as well as enterprises to discuss the existing practices across Gender Equality Plans (GEPs).

Triggering Question (TQ) of the workshop

What barriers or obstacles do we face when designing and implementing GEPs?

Following the voting process, 26 ideas received one or more votes and 11 were structured to create the influence MAP shown below. 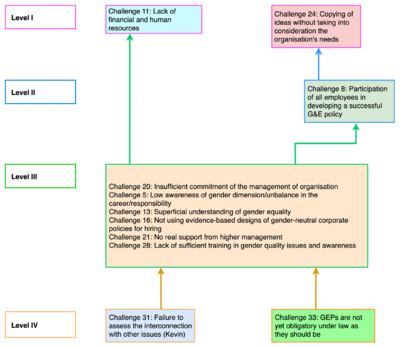 As demonstrated in the following Figure, the Influence Map of the virtual Structured Democratic Dialogue workshop includes four different hierarchical levels. The strongest obstacles are considered the root, which also pinpoint to possible drivers for change, i.e., removing them will be most effective. The implementation of these ideas should be prioritised in order to facilitate the implementation of the subsequent practices. These root obstacles are located at the bottom of the roadmap and in particular at the Levels II and to a lesser extend II, as they have the greatest influence among all other practices. It also follows that the practices identified on the upper levels of the Map are the least influential in facilitating the implementation of other practices. The influence of one obstacle over the other is completely unrelated to the importance of the two obstacles emerging from the voting phase that preceded. In this vein, any obstacle which has received more than two votes during the voting phase, and was thus moved to the Mapping phase, can be considered a root practice regardless of the number of votes it received. Therefore, an obstacle with “low popularity” can end up being a root barrier while an obstacle with “high popularity” can end up at the upper levels of the map. For instance, consider Ideas 24: Copying of ideas without taking into consideration organization's needs (Nafsika); 8: Participation of all employees in developing a successful G&E policy (Kriemadis); and 20: Insufficient commitment of the management of the organisation (Vicky), all of which have received top votes but did not make it to the root.