The Mutual Learning Workshop “What are the best practices to overcome problems, barriers, issues when implementing your GEPs?” was organised on December 9th, 2020 under the collaboration between the R&I PEERS partners CIC nanoGUNE and the Cyprus Neuroscience & Technology Institute (CNTI). Due to the Covid-19 pandemic and the consequent sanctions and difficulties in travelling abroad, the consortium of the project decided to deliver the workshop virtually through Microsoft TEAMS. Aiming to provide a unique experience to the participants, the workshop started with an opening key-note speech by Dr Petra Rudolf, Professor at the Zernike Institute for Advanced Materials, University of Groningen, Netherlands, who elaborated on unconscious bias under the title “Unconscious bias: how it impacts careers in science and how to mitigate this influence”.


"What are the best practices to overcome problems, barriers, issues when implementing your GEPs?"

Generation and Clarification of ideas based on TQ

For the successful execution of this virtual workshop, 9 stakeholders from across Europe directly involved in the design and implementation of GEPs in their organisations accepted the invitation to participate in the workshop. The workshop brought together eight female and one male participant. While five of them were directly involved in the operations of the R&I PEERS project, the other four are dealing with gender equality aspects in their organisations (i.e., three research centres and one research funding organisation). In the first phase of the workshop, the participants were asked to generate ideas to address the TQ “What are the best practices to overcome problems/barriers/issues (administrative, structural, financial, covid...) when implementing your GEPs?”. They came up with a total of 29 practices which, according to their experience, knowledge and expertise, would be helpful in addressing such challenges, which often appear while implementing GEPs in research organisations.

The third phase of the workshop concerned the clustering of the proposed ideas into groups in terms of their similarities and common attributes. In particular, the ideas were compared in pairs in order for the participants to discuss and finally decide whether two ideas should be clustered together (i.e., one idea has enough characteristics with another idea to justify placing them into the same cluster). During the implementation of the clustering phase, the following clusters were identified, which are graphically demonstrated in Figure 2:

In response to the TQ, the 9 participants came up with 29 ideas, which were categorized in 4 clusters.

Following the voting process, 20 (out of 29) ideas received one or more votes resulting to a ST of 62%. Although this is high, one should take into account the small number of participants and ideas, yet all stakeholders received five votes each. 15 were structured to create the influence MAP shown below. 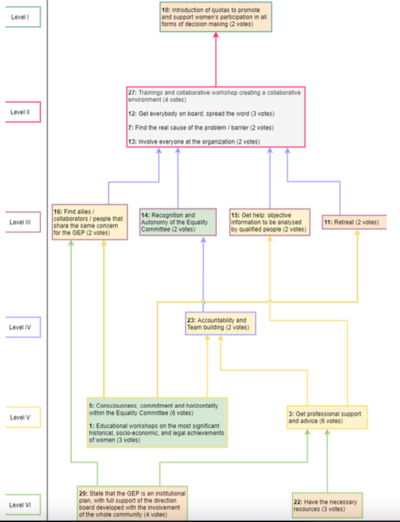