The Envisioning of a Future Keryneia Co-Laboratory was organized for the Keryneia Municipality on April 30 and May 2, 2007 on the initiatives of Rebecca Brubaker, a Future Worlds Center visiting Fulbright Scholar.

The co-Laboratory was sponsored and hosted at the Keryneia Municipality at the buffer zone by Ledra Palace.

The Triggering Question (TQ) was
What are descriptors of an ideal image of a future Keryneia?


In response to the TQ, the 10 participants came up with 65 Descriptors, which were categorized in 12 clusters. Following the voting process, 27 ideas received one or more votes and were structured to create the influence MAP shown below. 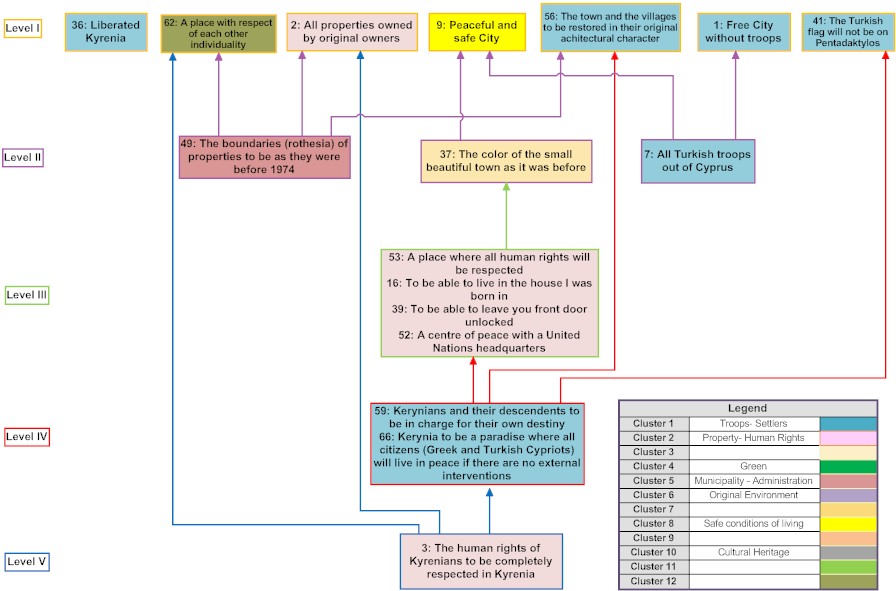 Influence tree from the Characteristics SDDP of the Envisioning a Future in Keryneia workshop for TQ.

According to the participants of this workshop, the descriptor that appeared to be the most influential is:

The following ideas were collected in response to the Triggering Question "What are descriptors of an ideal image of a future Keryneia?"

Discussion of the results

"We thank you for the hospitality!"

Although the co-laboratory was (1) practically organized by the elected representatives of the Municipality, (2) open invitations were sent to almost 4000 people and (3) it took place in the premises of the Keryneia Municipality, one participant felt the need to express gratitude and thank “us” for the hospitality. On further analysis and consideration of the circumstances and the psychological overload for those participants, it was concluded that the “hospitality” did not refer to the explicit organizational aspects, but to the hospitality the facilitators have demonstrated in enabling their deeper thoughts and feelings to be expressed. One of the analysts said characteristically, "the facilitators were hospitable to the souls of those participants".

Despite the fact that the whole co-laboratory was about designing the future, envisioning the future, disengaging from the present situation and de-factualizing, one participant was thankful for having had the opportunity to “remember” and “talk” about his past, his memories, and reflect about the many years lost …

On the ownership over their ideas

Before the beginning of the co-laboratory at least one participant wanted to know who is organizing the co-laboratory, why, what interests are there, who is funding it etc. Moreover, he waned to know what would happen with whatever they say in the room. By the end of the first three hours, the participants developed a strong sense of ownership over their ideas. They didn’t want to mix them with ideas of the new group, which was planned to convene two days later. The “descriptors” have assumed for them a role. They became the “designs” of their new Keryneia (even though they didn’t manage to disconnect and defactualize from the past) and as such they were valuable to them. The fact that each and everyone of them left the room with a print out of all ideas, made them feel that they have the designs in their hands. The fact they identified strongly with the most influential factors, made them want the world to know about their conclusions.

On the concept of time

In some strange way, our request for them to “disconnect” from the realities and constrains of today and to envision a future Keryneia didn’t feel unfamiliar to them. Yet, they were not able to “fly” into the future. Instead, when they were “released” from the constrains of today they simply took a journey to their past relying on faded and partly imposed memories. They idealized everything that lies in the past. Many facts and many realities of the past were distorted. There was no attempt to validate or question the truth of their statements. Descriptor 8 (Kyrenia in a United Cyprus in the United Europe as it was throughout the last 3500 years) is an example. The concept of time was not treated in a creative way as was the intention of the facilitators. Instead, time lost its meaning and they simply flew back to an idealized past (which they partly don’t remember and do not wish to validate for correctness).

Out of the 66 descriptors produced only 11 are not politically loaded:

Three of the descriptors (9, 30, 39) are about feeling safe; indirectly complaining for the presence of army, settlers etc.