Bringing the leaders together

A six day long workshop was held in Cyprus at the Sandy Beach Hotel in Larnaca, Cyprus from 25 July - 31 July 2010 (SDDP Act Beyond Borders Vision Building in Larnaca in 2010/SDDP Act Beyond Borders Problematique in Larnaca in 2010). The report can be downloaded.[1] Ten Palestinians and eleven Israelis attended. The participants were a unique combination of civil society actors, local business people and youth. In total, there were 21 participants and 2 partners that took part in the process. On the first day a project orientation workshop took place so the participants could learn and understand what is required from them and how they can capitalize throughout the project. In the following days, the the participants were engaged in a Co-Laboratory using the Structured Dialogic Design Process (SDDP) methodology.

The SDDP approach involved the organization of 3 Co-Laboratories (also referred to as Co-Labs). These included developing:

In each Co-Lab, stakeholders responded to a Triggering Question: 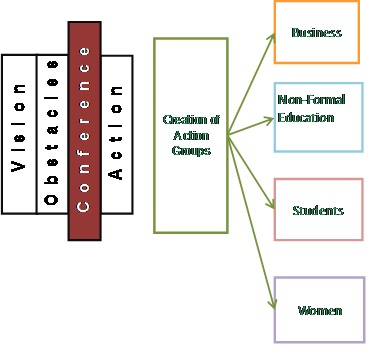 On July 29 2010 at the Cyprus Community Media Centre at Ledra Palace, Nicosia, Future Worlds Center organized for the participants a Cyprus Peace Makers Act Beyond Borders Conference. Several key individuals were invited from peace building projects in Cyprus to give a small welcoming speech, all of whom attended and gave small speeches about their experiences in Peace Building projects between the Turkish-Cypriot communities and the Greek-Cypriot communities.

The aim of this small gathering was for the participants to be able to experience firsthand conflict resolution cases from these two communities and thus relate some of these issues to their own problem.

The keynote speakers were: Mr. Marios Michaelides] member of the Advisory Board, Mr. Mustafa Damdelen, a prominent businessman who leads the Turkish Cypriot business community’s efforts to promote resolution of the Cyprus conflict and to normalize relations between Turkey and Greece and member of the Cyprus Conflict Resolution Trainers Group. As a director of the Turkish Cypriot Chamber of Commerce, he works to educate the people of his community about the benefits of European Union accession and supports conflict resolution training and other activities that seek to advance integration of Greek and Turkish Cypriots. Following was Ms. Canan Öztoprak who was the Turkish Republic of Northern Cyprus Cabinet Minister appointed in April 2005 by the Government of Prime Minister Ferdi Sabit Soyer. Her portfolios were National Education and Culture. She has been an active peace activist also member of the Cyprus Conflict Resolution Trainers Group. Mr. Lellos Demetriades then spoke to the Palestinian-Israeli group. Mr. Demetriades served as Mayor of Nicosia for 30 consecutive years from 1971 – 2001. During his long term in office as a mayor he initiated a harmonious joint venture with Mr. Mustafa Akinci on the Turkish Cypriot area of Nicosia in setting up a general Town Planning (Master Plan) of Nicosia and a public city Sewage System, which was a very difficult exercise in the divided city, the beneficial results of which have been noted by the U.N. Secretary General and appreciated by the people of Nicosia. Certain International Organisations (Europa Nostra, Habitat and very recently (22 September 2007) the Aga Khan) granted awards and medals to Lellos Demetriades and Mr. Mustafa Akinci, for their contribution in the cause of their common endeavour in particularly difficult times. Mr. Mustafa Akinci, the final speaker, was elected Mayor of Nicosia (north) by the Turkish Cypriot residents of the Northern half of Nicosia. Mr. Akıncı, was re-elected twice and served for 14 years, during which he established a fruitful dialogue and cooperation with his counterpart Mr.Lellos Demetriades. The projects –within the framework of the Nicosia Master Plan-which were initiated jointly with Mr. Demetriades, they received wide recognition and were also awarded by various prestigious international organizations.