The Challenges of Integration of Minority Groups in Swedish-speaking Ostrobothnia: Structured Dialogic Design as a Tool of Enhancing Diversity and Inclusion - Identification of Challenges

The aim of his research is to enhance diversity and inclusion of the minority groups such as migrants, ethnic/racial and sexual groups by identifying the challenges they face during the integration process to the society and by developing action plans to overcome these challenges. This Co-Lab/Workshop aimed to bring knowledgeable individuals from different societal groups together under one roof in Vaasa to discuss and identify the challenges and obstacles they face in today’s conditions, and to develop a focused and targeted action plans and solutions collectively towards these issues.

The workshop was held on September 22nd 2018 at Abo University in Vaasa, Finland with the participation of twelve (12) participants.


What challenges (political, economic, educational, sociocultural, religious, linguistic) do the minority groups is Swedish speaking Ostrobothnia face to integrate in the local community?

In response to the TQ, the 12 participants came up with 67 ideas, which were categorized in 8 clusters. Following the voting process, 24 ideas received one or more votes and were structured to create the influence MAP shown below. 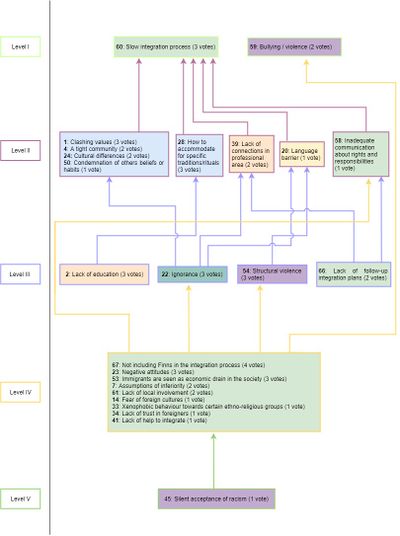 Influence tree from the ideas generated at The Challenges of Integration of Minority Groups in Swedish-speaking Ostrobothnia: Structured Dialogic Design as a Tool of Enhancing Diversity and Inclusion - Identification of Challenges

The workshop was facilitated by Andreas P. Andreou and Hasan Habes.