The workshop is one of the 34 European MMLs that will be conducted by the MARINA project partners all over Europe, as well as the second of the eight international workshops that will be conducted European cities between 2017 and 2018. The goal of the MML workshops is to create common visions, engage stakeholders to decide on common action plans on important marine issues related to the European Blue Growth Strategy, which will be exploited as policy recommendations on a national and European levels. In addition, the results of the workshops will provide input for the roadmap of Responsible Research and Innovation good practice as well as recommendations about embedding the RRI in the policy-making processes. The results will be assembled in a comprehensive report that will be submitted to the Directorate-General for Research and Innovation of the European Commission.

The Boulogne sur Mer International MML workshop brought together eighteen (18) participants from the public and private sectors, NGOs, citizens and local authorities interested in issues concerning the topic under discussion.


"What types of Responsible Research and actions should be put in place so that sustainable seafood production and consumption could contribute to competitive sustainable coastal and maritime tourism in Europe?"

In response to the TQ, the 18 participants came up with 34 ideas, which were categorized in 4 clusters. Following the voting process, 31 ideas received one or more votes and were structured to create the influence MAP shown below. 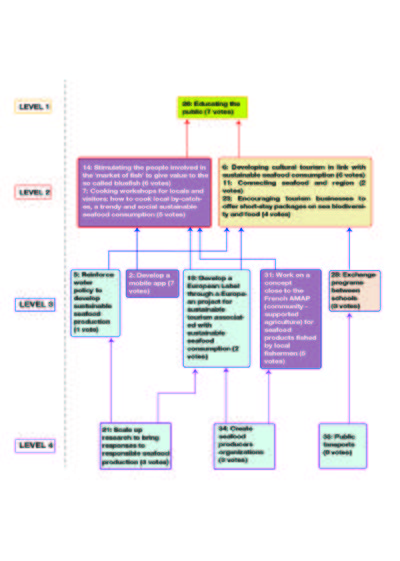 The workshop was facilitated by Yiannis Laouris and Katerina Fotiou.