The Cyprus Neuroscience & Technology Institute (CNTI) is a non-profit, non-Governmental independent organization active in programs with future orientation in areas related to human brain-modern technology-social transformation and the repercussions of relevant research for humanity.

The Cyprus Neuroscience and Technology Institute was founded through the initiatives of Yiannis Laouris and a team of repatriated Cypriot scientists with the support of ex-Minister of Education and Culture Dr. Chrysostomos Sofianos, District School Inspector Dr. Chris Laouris, the Bishop of Paphos Chrysostomos (now Archbishop of Cyprus) and three prominent foreign academics Prof. Dr. Sc. Med. Peter Schwartze (Germany), Prof. Dr. Med. Habil. Uwe Windhorst (Germany/Canada), and Regents Prof. Douglas Stuart (USA). It was registered on the 6th of November 1991 and launched its activities in 1993. Between 1994 and 1999 it expanded its operations hosting a number of peace related projects. It was re-structured in year 2000 modifying its original Constitution to embrace projects aiming in the development of an active civil society in Cyprus, as well as projects with international scope, especially those that involve the application of technology towards bridging the literacy, economic and digital divides (Development and IT Education). At the end of 2005 it evolved into a larger organization with a pure international orientation integrating all its activities under one umbrella and a new name, Future Worlds Center.

Read more about the birth of the Cyprus Neuroscience Institute.

CNTI is credited for the development of the Cyber Kids Curriculum.

CNTI launched in 1993 an innovation fair under the running title “Innovation-Technology-Social Progress Fair[1].” The Ministries of Commerce & Industry, Education & Culture, as well as Labour & Social Insurance, were collectively engaged in order to signify the economic, academic and job-creating facets of promoting innovation. The Fair was mainly supported by the Cyprus Development Bank,the Bank of Cyprus and CYBER KIDS.

RTD for children and vulnerable groups

Many of CNTI’s projects aimed the exploration of childrens’ and special needs individuals’ attitudes towards and interactions with information technologies. In 2005, CNTI launched a number of projects that promote and implement research in the field of safer use of the Internet; Cyberethics[2], Cyprus’ Safer Internet Center, which includes a Hotline[3] and a Helpline[4]. CNTI has also founded the Unit for the Rehabilitation of Victims of Torture.

CNTI pioneered with a number of projects in the promotion of peace and reconciliation in Cyprus. The Technology for Peace[5] initiative in 1997 aimed to capitalize on the proliferation of the Internet as a means to bear the communication barrriers between the northern and the southern parts of divided Cyprus. Other notable peace projects include the Youth Promoting Peace, Civil Society Dialogue project in Cyprus|Civil Society Dialogue, the Act Beyond Borders[6], Reconciliation Now!, Young Journalists Project, and Everybody's song [7]

CNTI scientists represent Cyprus in a many European and international networks such as: 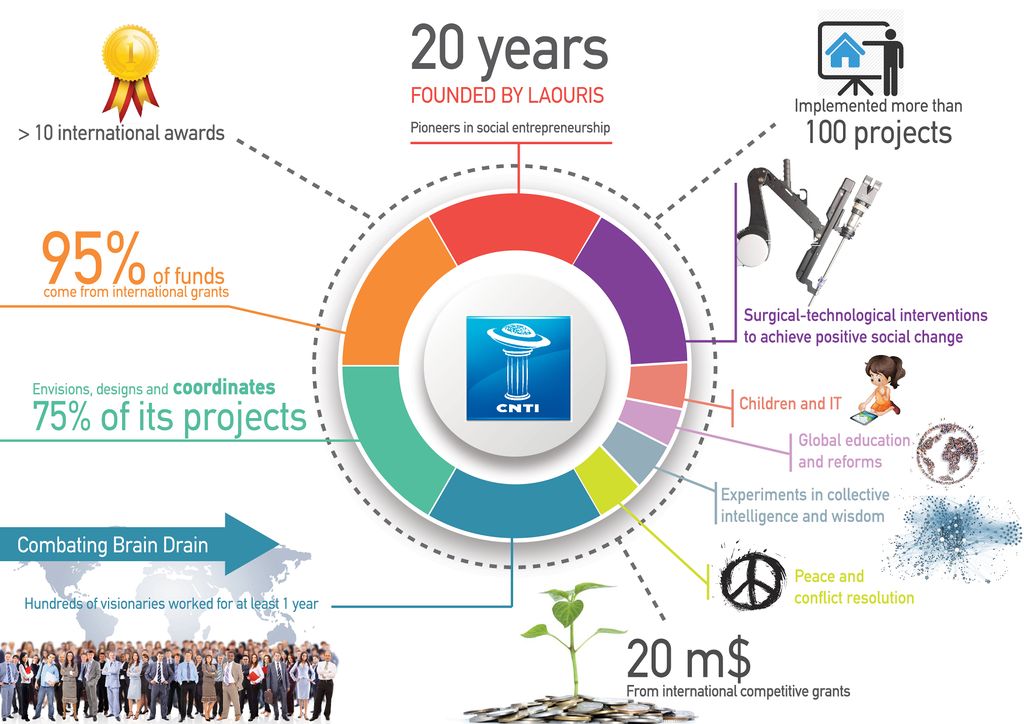 The key messages include the following facts:

CNTI and several of its members have been honored with many prestigious awards. See the complete list at: