This innovative media conference has been organized in the context of the Journalism for Peace project. Thirty high-profile Cypriot journalists have been invited to participate in a full-day long, interactive, closed-doors process composed of two separate symposia, aiming the adaptation, improvement and modernization of institutions and practices of journalism in Cyprus, especially in the context of the anticipated solution of the Cyprus problem and the accession of Cyprus in the European Union.

The meeting was organized by the HasNa Cyprus Office that operates under the Cyprus Neuroscience and Technology Institute and is sponsored by HasNa Inc. (Washington DC), which sponsors international programs that promote peace and reconciliation.

The organization of this event was inspired in the context of the wider vision of active citizens and non governmental organizations to contribute towards encouraging the stronger participation of citizens in issues that concern them, the improvement of communication between society and citizens as well as with centers of power, and in general the development of mechanisms that effectively manage the "common good" (i.e., for self-criticism, reflection, self-regulation and continuous improvement and advancement of relevant processes).

Besides Dr. Yiannis Laouris, Chair of the Board of Cyprus Neuroscience and Technology Institute, the conference was addressed by Mr. Marios Karoyian, Press Representative of the President of the Republic of Cyprus, Dr. Nicos Peristianis, President of the Cyprus Association of Social Scientists and Director of Intercollege and Mr. Neofytos Epaminondas, Director of Cyprus Radio-Television Authority.

The meeting was composed of two separate symposia designed in the spirit of ancient Athenians, with the participants having equal and ample opportunities to deliberate, exchange views and discuss in depth relevant issues.

The first symposium triggered with the question, "Do Cypriot media play the role of being marionettes of decision-making centers and also adopt the role of 'Directors' treating their public as their own marionettes?" Lefteris Adeilinis, Chief editor of SIGMA introduced the subject and coordinated the discussion between the panel and the participants. Preliminary contributions were made by the panel, which was composed by Yiannis Antoniou, Editor at Fileleftheros Newspaper, Andreas Hadjikyriakos, Head of News at MEGA and George Pavlides, Chief editor at Astra. Following a 60-min constructive exchange of views and opinions with the participantsm the two analysts presented scientific knowledge and evidence of the issues, practical angles and documented the convergent view of the process. Furthernore they offered stimulation for the imp,emendation of the symposium with aim the creative interchange of ideas and their evolution into practical best practices aiming the development and modernization of journalism in Cyprus. As Analysts, were Prof. Niki Katsaouni, Associate Professor at the Department of Journalism at Frederick Institute of Technology and Mr. Neofytos Epaminondas, Director of Cyprus Radio-Television Authority.

The focus of the symposia was the explore whether the media cover the news in objective and transparent way, the possible conflicts of interests when journalists have also other roles in society as well as the conflict between a service for the propel versus a profession. The issue of self-regulation and the degree of autonomy from the owners and from the percentage coverage were considered and discussed.

The question whether the Cyprus media are marionnettes of decision making centers and also treat their public as mariannettes, was considenred by each participant separately who provided their analysis as well as enriched their responses with their personal experiences and beliefs.

This symposium was coordinated by Costakis Constantinou, head of the journalism department of Frederick as well as political editor of Xaravgi. The panel was composed by Andreas Paraschos, Head Editor of Politis Newspaper, Nicos Prokommenos, Chief Editor of ANT1 Radio, Pambos Charalambous, Political Editor for Alitheia Newspaper. The following personalities served as analysts: Joseph Joseph, Chair of the Departmet of Political and Social Science of the University of Cyprus and Νiyazi Kizilyurek, historian at the Department of Turkish Studies, of also at the University of Cyprus.

The organizers reported that the following aims have been achieved

The conference was sponsored by the following: 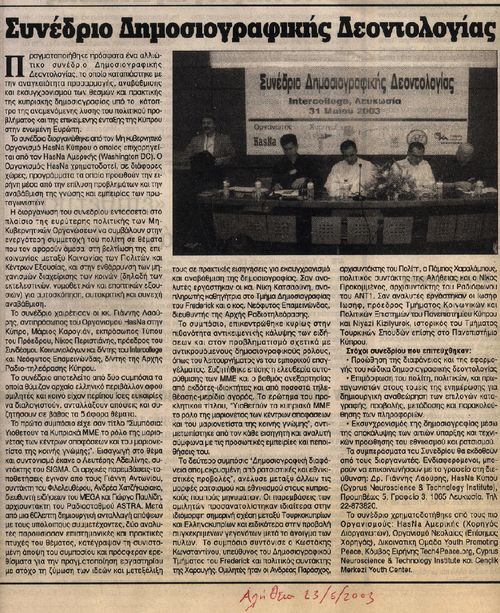