What factors will help significantly in rescuing the enlightenment from its failings?

World history was made in a synchronous global interactive WebScope Dialogue facilitated by Alexander N. Christakis on the island of Crete on July 21, 2006 (www.loversofdemocracy.org). For the first time, the actual structuring phase of SDDP was implemented using virtual technologies with participants being geographically separated. A group of nine students of “Democracy and The Enlightenment” brought on from the Flinders International Asia Pacific Institute, in Adelaide, Australia, with other members of the Knowledge Management Team (KMT) spread over various locations in the USA (Kenneth K. Bausch, an expert in systems sciences and Marie Kane, an expert in corporate marketing, located at Fayetteville, Georgia, Diane Conway, computer software and internet conference system operator, located at Paoli, Pennsylvania and Vigdor Schreibman, reporter/observer from FINS in Washington DC). As Schreibman (2007) reports, “A Global Boundary-Spanning Dialogue, all together in the world of Cyberspace, at different local times and places. Distant participants were able to view the same screen of the Cogniscope as those present in the room using Claripoint, special software that allows broadcasting of a computer screen through the internet. Their virtual presence in the room was made possible using traditional telephone conferencing.” During the week of WebScope Dialogue, between July 14 and July 21, 2006, the KMT guided the student participants in their asynchronous response to a triggering question: “What factors will help significantly in rescuing the enlightenment from its failings?” During the first six days, the students generated a set of 49 factors. They subsequently carefully clarified these factors, so that everyone had a good understanding of the meaning of each other’s ideas, using only their e-mail facilities. The set of factors were then classified into nine clusters and prioritised subjectively by relative importance. The KMT organised all the information efficiently and periodically returned pertinent KMT Reports6 to the student-participants, who were the ‘content-experts’ of the group dialogue, so that they could concentrate their attention on producing the content of the dialogue. Then, on the seventh day, the whole group engaged in a synchronous focused and open dialogue via the WebScope for approximately three hours. At this session the student group at Adelaide, Australia guided by lead facilitator in Crete, with the KMT in Georgia, Pennsylvania and Washington DC produced a rcm, RCM7, disclosing the influence tree among factors of higher relevant importance. The production of the RCM enabled the group to discover the root causes of the failures of “Democracy and The Enlightenment”, which could guide future collective collaborative action. The RCM disclosed three factors that must be addressed before a recovery of “Democracy and The Enlightenment” could be realised. These are considered to be the true drivers in the very complex issues addressed by the group. The first of these root causes, pointed to the extremes of either optimism or pessimism that guides public administration and political economy. This, contrasts with research that shows the large benefits of policy guidance, not by experts, but by the ordinary people (see for example, Yankelovich and Harman, 1988). The second root cause disclosed the need for improving local governance by using local knowledge. And the third root cause disclosed the need to make room for the exercise of power by minorities. Overcoming these three root causes is the key to generating mutual respect and greater trust, which are essential elements of success of any community or society. According to the final report, the global dialogue communications via telephone conferencing and internet connectivity was subject to local weather disturbances and power outages. These interruptions will require careful monitoring in future applications of the WebScope model to assure best practices. In sum, the virtual co-laboratory produced results that were considered by the experts to be of highest quality and comparable to those that would have been produced in the context of a longer session taking place in a face-to-face physical setting. 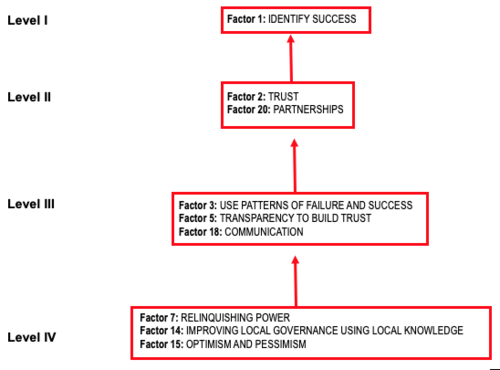