This report has been developed in the context of the CARDIAC project (FP7 - Coordinating Action: Grant Agreement 248582). The goal of the project is to create a platform that can bring together the various stakeholders in the area of accessible and assistive ICT with a view to identifying Research & Development gaps and emerging trends and generating a research agenda roadmap. The Lead facilitator of the SDDSM, Dr. Yiannis Laouris, served as the person coordinating the process. Cogniscope3 operator was Mrs. Georgina Siitta Achilleos. There were 22 people participating in this SDDSM, one of whom participated through videophone. The workshop was facilitated by Yiannis Laouris (CNTI), Georgina Siitta Achilleos and Tatjana Taraszow (CNTI).

Following a two-month consultation with the stakeholders via the Cardiac Wikispace1, offered 74 responses to the triggering question utilizing the Wiki.

The Triggering Question (TQ) was
What type of research is missing that could facilitate development of inclusive HCI?

In response to the TQ, the 22 participants came up with 75 characteristics, which were categorized in the following clusters:

The results of both voting procedures were used in order to select ideas for the following structural process. The participants were able to structure 33 out of the 50 ideas that received votes. This includes all ideas that received two and more votes (30 ideas) plus those ideas that initially received one vote and received the most votes during the second voting cast (3 ideas).

The resulting “Tree of Influences” demonstrates the most influential ideas, which have the greatest impact. The tree is made up of 5 levels of influence, 33 ideas and 101 connections and it is presented below. 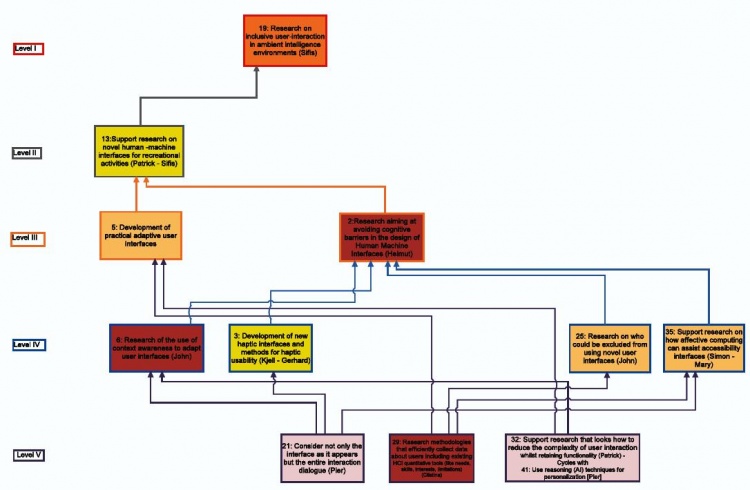 According to the participants of this workshop, the characteristics appear to be the most influential were:

The participants had time to discuss and reflect on the influence map and in general agreed that the arrows in the map made sense to them. The structured dialogue process empowered the consortium team to identify the most influential research that is missing that could facilitate development of inclusive HCI and to assign to different members the role of carrying the discussions forward via the CARDIAC Wikispace and starting the analysis of how implement the various mechanisms.
In sum, the application of the SDDSM process supported the Consortium to identify potential mechanisms that ensure successful technology transfer in accessible and assistive ICT products and services.