The Platres Co-Laboratory was part of a series of SDDPs: Structured Dialogic Design Process Co-Laboratories, which took place between December 2006 and August 2008 all over Cyprus and were implemented by Cyprus EU Association and Cyprus Intercultural Training Initiative within the scope of the Civil Society Dialogue project.


The Platres Co-Laboratory was the first of 5 and is often referred to as the peace revival SDD. It took place at the Forest Park Hotel (Platres, Troodos) between 10-11 March, 2007. 20 Cypriots - 8 Greek Cypriots and 12 Turkish Cypriots - participated in the dialogue. Participants included stakeholders of different types to the Cyprus peace process. 15 participants had relevant experience and have contributed significantly to the Cyprus peace process in earlier years.
The Knowledge Management Team included Yiannis Laouris, Ali Erel, Marios Michaelides, Mustafa Damdelen, Tatjana Taraszow, Ilke Dagli, and Romina Laouri plus an international wing lead by Aleco Christakis with Ken Bausch, Roy Smith, Vigdor Schreibman, and Diana Connaway.

The Triggering Question (TQ) was
In the context of the overall objective of bridging the gap between the two communities: What short- to medium term goals in your opinion if achieved would contribute significantly to the above objective?


In response to the TQ, the 20 participants came up with 83 ideas, which were categorized in 13 clusters. Following the voting process, 44 ideas received one or more votes. 12 ideas were structured to create the influence MAP shown below. 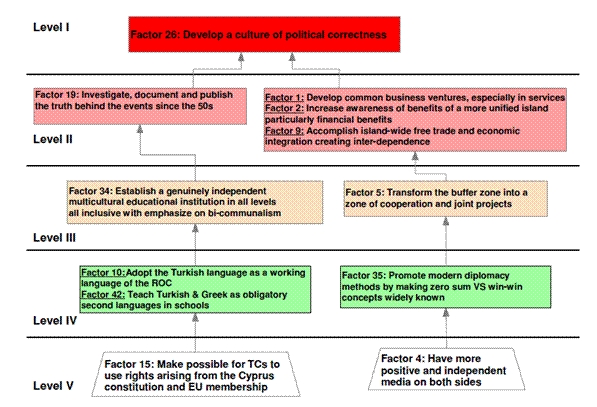 According to the participants of the Platres / peace revival Co-Laboratory, the options with the greatest positive influence on bridging the gap between the two communities in Cyprus were:

The Knowledge Management Team later structured an additional 15 ideas to create the influence MAP shown below. 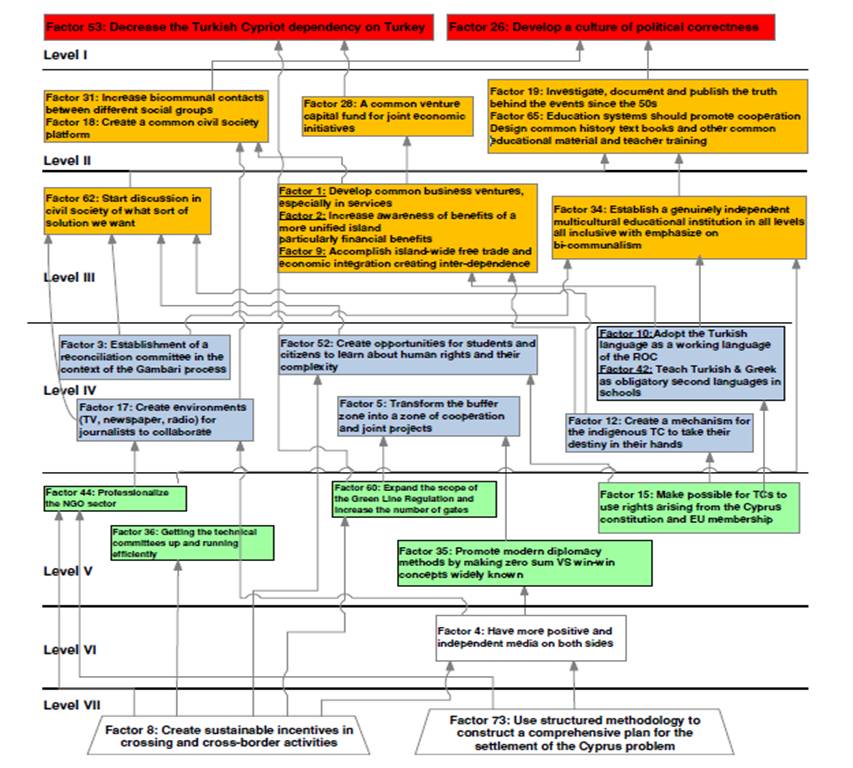 According to the revised MAP of the Platres / peace revival Co-Laboratory, the options with the greatest positive influence on bridging the gap between the two communities in Cyprus were:

The two most influential options identified in the first MAP moved higher up in the MAP, thus still important

In sum, the participants of the dialogue reported satisfaction that their voices have been heard and documented, therefore they communicated their expectations for follow-up activities to address the diagnosis of their needs.


The full report can be downloaded from here.
The full paper is available from Open Access

This first Co-Laboratory within the Civil Society Dialogue project was used to organize a series of follow-up dialogues in areas of utmost importance to the Cyprus problem / Cyprus peace process. Therefore, Structured Dialogic Design Co-Laboratories focusing on the most influential options to bridge the widening gap between the two communities as identified in the Platres / peace revival dialogue were organized.