For the first time ever, Cypriot journalists and media figures used the Structured Design Dialogue Process (SDDP) during the “New Media Landscape Now” meeting, which took place in Nicosia, Cyprus 3 and 5 December 2007. The SDDP is a technique that facilitates dialogue by engaging all stakeholders in a democratic manner. The primary aim of an SDDP co-laboratory is to achieve consensus regarding actions for improvements, based on a shared understanding of the current situation. The process is designed in such a way as to harness the collective wisdom of all participants. In an SDDP co-laboratory, the participants are the experts whose shared knowledge is extracted and then used to generate influence maps between separate ideas. Before engaging in a face-to-face dialogue the participants were invited to interact by means of a virtual co-laboratory employing the technology platform of the wiki. Twelve participants offered 35 responses to the triggering question utilizing the Wiki.


What factors inhibit the development and practice of effective journalistic ethics in Cyprus?

The participants altogether grouped these 53 factors into eleven categories based on common attributes among the factors identified by the Cyprus Journalists.
These categories were named the following:

After having generated, clarified, and clustered the obstacles, each participant chose five factors that they thought were the most important. The voting results were used to select factors for the subsequent structuring phase to identify inter-relations among the generated factors. Participants managed to structured only 8 factors during the time available. A smaller group volunteered to structure some more Factors in a subsequent meeting.

The following Figure which is considered ‘New Media Landscape Now! – Problématique – Root Cause Map’ shows the resulting influence tree map.The 8 factors were structured within five levels and are related according to the influence they exert on each other. Those factors that appear lower in the Root Cause Map, hence are positioned at the root of the tree, are more influential in terms of influence than those at higher levels and are the ones to tackle preferentially. 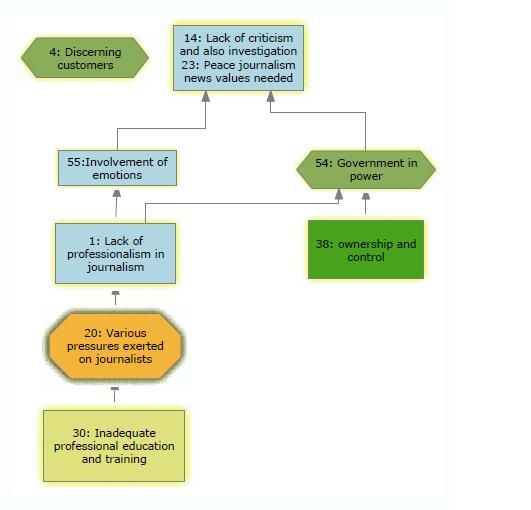 According to the participants of this workshop, the factor appear to be the most influential was:

which in turn worsens the vulnerability of journalists top various types of pressures thus decreasing the professional level of their work. In parallel, the other influential factor was:

which is not only a problem in Cyprus but nowadays, an international issue, because a usually very small number of individuals won and control all media channels in a country, thus being able to manipulate massively the public opinion.

By engaging the bi-communal group in a disciplined dialogue, the NMLN initiative enabled them to derive a large number of inhibitors (53), clarify their meanings, identify those of higher relative importance, and derive graphic patterns displaying the similarity and influence relationships among the important inhibitors. The dialogue made it possible for the participants to identify the dimensions of the problem situation in terms of the ‘eleven clusters of inhibitors’ and draw distinctions between fundamental strong leverage inhibitors at the bottom of the Root Cause Map and symptomatic inhibitors along the branches of the Map.