The Copenhagen International Mobilisation and Mutual Learning (MML) Workshop entitled "Sustainable tourism in coastal areas: The challenge of urbanisation" was organized by the Aalborg University (AAU) and CNTI in the context of the project MARINA, funded by the European Union’s Horizon 2020 Research and Innovation Programme, on May 30th 2017 in Copenhagen, Denmark.

The workshop is one of the 34 European MMLs that will be conducted by the MARINA project partners all over Europe, as well as the third of the eight international workshops that will be conducted European cities between 2017 and 2018. The goal of the MML workshops is to create common visions, engage stakeholders to decide on common action plans on important marine issues related to the European Blue Growth Strategy, which will be exploited as policy recommendations on a national and European levels. In addition, the results of the workshops will provide input for the roadmap of Responsible Research and Innovation good practice as well as recommendations about embedding the RRI in the policy-making processes. The results will be assembled in a comprehensive report that will be submitted to the Directorate-General for Research and Innovation of the European Commission.

The Copenhagen International MML workshop brought together fifteen (15) participants from the public and private sectors, NGOs, citizens and local authorities interested in issues concerning the topic under discussion.


"What networks and actions of innovation and research are necessary to ensure that coastal cities prosper and benefit from sustainable tourism and at the same preserve their cultural, environmental and social inclusionary qualities?"

In response to the TQ, the 15 participants came up with 33 ideas, which were categorized in 5 clusters. Following the voting process, 23 ideas received one or more votes and were structured to create the influence MAP shown below. 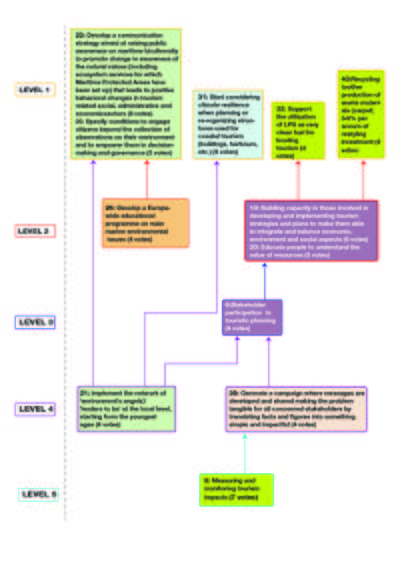 The workshop was facilitated by Yiannis Laouris and Kevin Dye.

At the end of the SDD, Laouris and Dye conducted an experiment. They requested from the participants to evaluate the factors that made it to the Influence Map, for the following parameters (Likert 1 to 5):

The theoretical grounding is that a high difference between the averaged scores for Impact and Probability for a particular idea is interpreted that, according to the participating stakeholders, the specific idea has high impact, but it will not happen unless the relevant stakeholders take targeted actions, i.e., low probability to happen without new intervention. This knowledge helps systems designers to produce more effective road maps, by focusing their efforts on actions that will not happen otherwise, and they have high impact. Next, they checked the feasibility of ideas that turn out to have high priority based on the previous analyses and promote those that are easier to implement (i.e., higher score in feasibility). The purpose of this experiment was to combine these scores with the influence weights provided by the Influence Maps to produce more effective road maps.