This co-laboratory is part of a cycle of trainings and other activities organised within the framework of the European project MeDevNet (Contract: Capacity and Synergy building among NGDOs and LAs in Greece, Cyprus and Malta for development). The MeDevNet project is implemented in the target countries Greece, Cyprus and Malta. The overall objective of this co-laboratory was to find the most influential obstacles that prevent cooperation beetween Local Authorities and NGO’s. The structured dialogue process empowered the consortium team to identify the most influential mechanisms in overcoming these obstacles. The workshop was organized using the structured dialogic design process (SDDP) approach within the context of a rich web-based communication environment.

The Triggering Question (TQ) was
What obstacles prevent cooperation between Civil Society & Local Authorities in Malta towards achieving Millennium Development Goals (MDGs)?
In response to the TQ, 19 participants came up with 47 ideas, which were categorized in 5 clusters. Following the voting process, 21 ideas received one or more votes and were structured to create the influence MAP shown below. 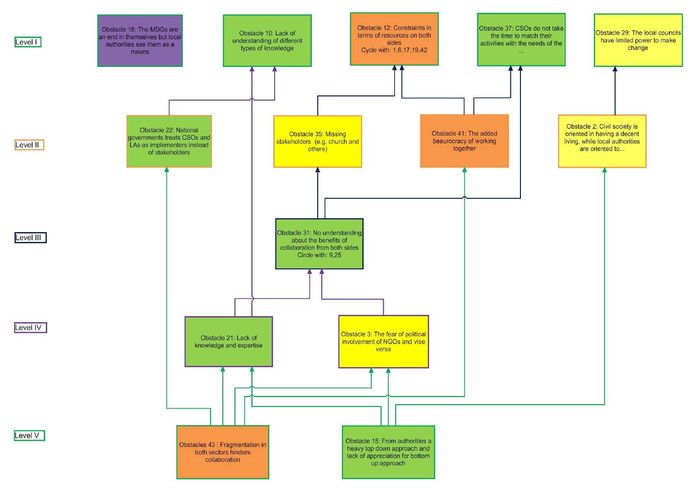 Influence tree from the Characteristics SDDP of the MeDevNet Malta laboratory TQ.

According to the participants of this laboratory, appear to be the most influential were:

The co-laboratory was organized by Dominik Kalweit and William Grech and it was facilitated by Yiannis Laouris, Tatjana Taraszow and Ilke Dagli.

The MeDevNet project is funded by the European Commission under the EuropeAid program.
The project’s partner organisations are:

The associate partners are: