The Mutual Learning workshop “Towards the identification of measures and actions for successful Gender Equality Plans implementation within Research Performing Organisations (RPO)” was organised by ZRC SAZU and CNTI in the context of the project R&I PEERS funded by the European Union’s Horizon 2020 Research and Innovation Programme, on October 14th, 2019 in Ljubljana, Slovenia.

The workshop, which was realised using the participatory methodology of the Structured Democratic Dialogue (SDD), brought together fifteen (15) experts from the gender equality field representing universities, governmental and scientific bodies to discuss measures and actions to facilitate the development and execution of Gender Equality Plans (GEPs) in Research Performing Organisations (RPOs).


"What measures/actions (administrative, organizational culture-related, financial, legal...) should be taken to make Gender Equality Plan implementation beneficial for all employees in research organizations?"

In response to the TQ, the 15 participants came up with 54 ideas, which were categorized into 7 clusters.

Following the voting process, 28 ideas received one or more votes (ST 47%) and were structured to create the influence MAP shown below. 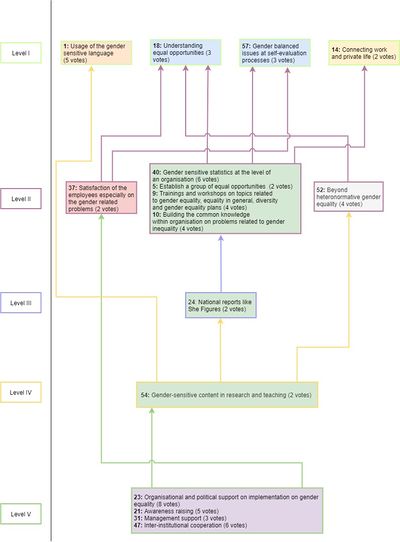 Serving as R&D for further development of Wisdom Tools

The data from this and from other SDDPs of H2020 projects have been also used to test and validate the next versions of wisdom tools developed by Future Worlds Center in collaboration with Ekkotek, such as: