Towards a New Media Landscape

Building on previous HasNa Inc. funded media related projects, and taking advantage of the mobilization of the journalists’ communities which happened within the Civil Society Dialogue project, Towards a New Media Landscape aspired to take the results to a higher and hopefully more constructive level.

The aim was to actively engage journalists and media experts from both communities in identifying and diagnosing the media situation, in creating a joint vision map for a future media landscape, and in developing an action plan to transform the media world. The project aspired to enhance the role and effectiveness of the Cypriot media in the reconciliation process by creating a critical mass of journalists and editors within Cyprus’s leading media organizations that understand the ethics and practices of a free and balanced media, and that have acquired new skills to advance the practice of journalism in Cyprus.

The project addressed the following groups:

The project was implemented over a period of eight months, including three project phases starting September 1, 2007 and running through April 2008: (1) the Preparation Phase, during which the project team identified four journalists in each community, who committed to actively participate in the project; (2) Closed Door Media Conference, which brought together 24 journalists from both Cypriot communities to design a vision map and an action plan for a transformed media landscape; and (3) Dissemination Phase, during which the project team in close collaboration with the journalists produced a series of guidelines addressing the above mentioned target groups.

(1) Preparation Phase The project team identified four Greek Cypriot and four Turkish Cypriot journalists, who committed to an active participation throughout the project. The selected journalists agreed to collaborate on diagnosing critical problems of the media worlds in Cyprus and on identifying potential ways to transform the situation. The chosen journalists were the core group for the project and had a large share of the responsibility for its success. The journalists selected took leadership roles in the project, committed to the time requirements, and dedicated their selves to building a “New Media Landscape Now!” and form the core of the entire group of media professionals as well as be the foundation of the project itself.

The main objective was for the core journalists to join together in solidarity to hash out and ultimately agree upon a set of standards for members of the Cyprus media to honor and follow as a professional guideline of good practices. The agreed upon set of standards will then be introduced into the forth coming “Closed Door Media Conference.” A newsletter was produced to announce the project details to the general public, media and government officials.

(2) Media Conference A conference was organized for 12 Greek Cypriot and 12 Turkish Cypriot journalists representing a wide spectrum of newspapers, Radio and TV stations. The participants came together to discuss freely and design a shared vision of a future media landscape of Cyprus, and to examine the set of standards, drafted during the core journalist conference held previously to give their input to the development of an action plan with steps towards a transformation of the media landscape.

Dr. Aleco Christakis was the international expert who led the Closed Door Media Conference. Dr. Christakis, one of the principal inventors of the "Technology of Democracy" has challenged conventional talk in socio-political systems design, which "has become a minefield" writes Christakis. Under the theory of the "Erroneous Priorities Effect" (EPE) that Christakis developed after extensive research at the Food and Drug Administration, he says, "even with good intentions" we cannot collectively walk the talk "unless we change the paradigm for languaging." Effective priorities for actions that are dependent on recognizing the influence patterns of global interdependencies are defeated by EPE, when priorities are chosen on the basis of aggregating individual stakeholder subjective voting that is largely blind to those interdependencies.

For the selection of stakeholders the project brought together experienced media professionals from both sides of the island to share experiences and work to create a platform where ideas are discussed and an Action Plan devised to build a “New Media Landscape Now!”. The selection process consisted of an invitation letter sent to all media outlets on both sides of the island. Participants were chosen who were well educated and motivated Turkish Cypriot and Greek Cypriot journalists, having years of media experience. They came together with others who work in diverse areas of the media field in Cyprus to share experiences and ideas and generate their vision of a “New Media Landscape Now!” for the island.

(3) Dissemination Phase During the last phase of the project, the project team together with the bi-communal group of eight journalists developed a set of guidelines, addressing all major stakeholders involved in the media landscape, sharing good practices and potential actions towards a more transparent media world.

The goal of the New Media Lanscape Now project was to bring together journalists from both sides of divided Cyprus to produce a strong vision for an ideal media landscape to serve as a magnet to mobilize a chain of transformation. 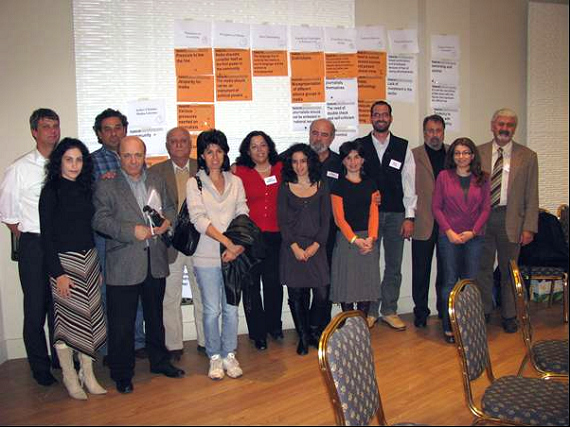 The high point of this project, funded by HasNa Inc. was the organization of a structured democratic dialogue to support a diverse group of journalists identify the obstacles they face in doing their job in Cyprus. The results are documented in:

Upon setting the date for the for the Greek Cypriot (GC) workshop invitations were written in Greek and distributed to over 100 media professionals in Cyprus. When the head of Union of Cypriot Journalists received the invitation he responded in an unexpected way. A letter was written demanding that we cease our project immediately. The reasons given were:

The letter specifically named project director Larry Fergeson as an outside agitator and agent provocateur who should be avoided in all instances. The head of the Union of Cypriot Journalists, Mr. Andreas Kannaouros demanded that no union members take part in the project under threat of exposure and retaliation. The letter was also submitted to the GC parliament.

These developments seriously hindered our ability gather participants and facilitate the follow-up, closed-door conference in the South. Only one GC participant agreed to attend and he is actually employed at Eastern Mediterranean University which is a Turkish Cypriot (TC) university.

The follow-up, closed-door conference in the South was cancelled.

Efforts in North Cyprus were much better received and there was renewed hope that we could continue on with a large part of the project and produce useful, valid results. Two well-known and respected leaders in the TC media, Hasan Kahvecioglu and Ozcan Ozcanhan, were engaged and provided assistance to the project by helping to contact other members of the TC media. Yhey also served as members of the Advisory Board of this project. The consultations were an expression of their support for our endeavours. In Cypriot culture this is invaluable as local support is very helpful in achieving positive results. Several meetings were set up with the respected leaders and communication was frequent. The project team also created invitations in Turkish and distributed these to over 75 media professionals in the North. Follow-up phone calls were made and assurances of participation were given.

Ozcan bey was the most active and through his efforts many developments occurred: 1. we arranged a sit down meeting with the owner of Genç TV to discuss the station’s operations as a community supported television station and their participation in our project; 2. We had an audience with Mehmet Ali Talat, the President of Turkish Republic of North Cyprus. We provided the president with our project materials and informed him of our activities.

What originally was thought of as a benefit of this meeting ironically ended up being a negative development for the project. The next day after the meeting and because of its high profile, TAK, Türk Ajansı Kıbrıs (in English, Turkish News Agency-Cyprus), the official government news agency called the project team to announce their support for the project. They told us they sent out a message to all media outlets in the north requesting they participate in our project. This is where a miscommunication or mistranslation of the language occurred that seriously damaged the effectiveness of the project. We thought the affect of the TAK press release would increase our participation rates. However, the media understood this as a call to come and cover the event and not as an invitation to participate. On the day of the event at the appointed time, nearly 20 media professional showed at the Saray hotel. Initially, we were thrilled as we thought all would stay. However, the 3 television stations, 4 radio stations and an international reporter were only there to cover the story. Thus, we were left with only 7 participants, but we went ahead as scheduled. During the first break, the project team started making phone calls to the media professionals who agreed to participate as well as the media who showed up to cover the event and find out where they were. 10 of these phone calls were successful as the media professionals agree to come the next day. Therefore, we decided to go ahead with the next day’s workshop. However, none of the 10 showed the next day. Nonetheless, we went forward and completed the work shop with 7 participants which was not enough to produce valid scientific results.

Put together a set of guidelines

A Guidelines Book for journalists in Cyprus was drafted called The Peace & Media handbook: Cypriot Peace Journalism. The booklet shares good practices and potential steps towards a new media world. It was disseminated among the main stakeholders related to media on both sides.