Future Worlds Center, earlier known as Cyprus Neuroscience and Technology Institute, together with its technology partner CYBER KIDS has engaged in peace-related initiatives as early as 1994, because the focus on peace is one of its Constitutional and Value Policies. Its founder, Yiannis Laouris was one of the participants of early peace projects such as The Westminster Group, Bicommunal Conflict Resolution Group (Project Leaders I), Bicommunal Conflict Resolution Group (Project Leaders II), and Cyprus Conflict Resolution Trainers Group. Between 1994 and 1997, the center has provided generous logistical and technological support, and has also hosted countless meetings. Harry Anastasiou, another historic member of many early peace initiatives and especially the Cyprus Conflict Resolution Trainers Group[1], which is credited for the formation of the embryonic peace movement in Cyprus, has joined powers when Harry was invited to join CYBER KIDS as Head of the CYBER KIDS Curriculum Development Unit[2]. A strong supporter of their initiatives was the Director of the Cyprus Fulbright Commission Daniel Hadjittofis, who became a close friend of the center and also served as member of its Board between 1994-2001.

Harry and Yiannis have coordinated and trained several early peace initiatives. Together with virtually all members of the Cyprus Conflict Resolution Trainers Group, they are credited for the training of over 2,000 citizens in peace and conflict resolution, as summarised in the diagram below. This historical map was developed by Yiannis Laouris using the results of a workshop of the Group, which took place on 4 October 1997. The purpose of the workshop was to summarize the activities of the group and catalog all bicommunal initiatives starting from 1974. It was presented publicly in the occasion of a celebration organized by the 15 foreign embassies in Cyprus to honor the members of the group[3]. Ironically, the media, especially in the North, accused them for waking up and provoking Turkish Cypriot leader Rauf Denktash to ban bi-communal meetings[4]! Nonetheless, the members of this group served as initiators and/or trainers of about a dozen of those groups. In these early trainings, they have applied Interactive Management, the methodology they have learned from their participation in the Cyprus Conflict Resolution Trainers Group and especially from Benjamin Broome, a student of John N. Warfield. Interactive Management is the predecessor of what later became knows as Structured Democratic Dialogue. 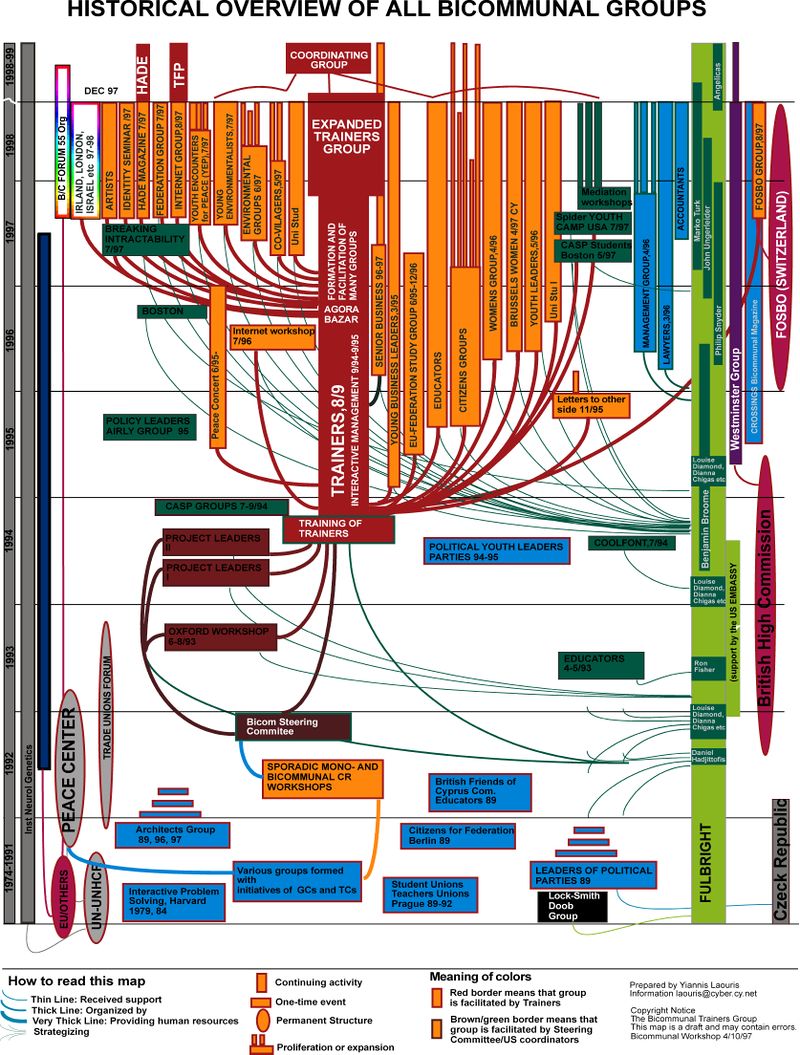 The work of this group culminated with the decision to request the formal support if the UN sent in the form of a letter in February 1997. 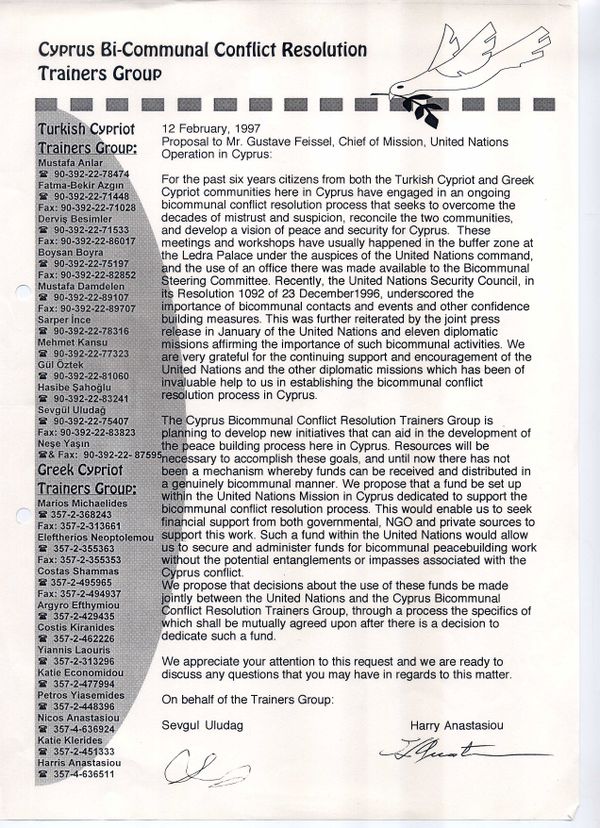 The letter was co-signed by Harry Anastasiou, at the time already member of the Board of Future Worlds Center, on behalf of the Greek Cypriot community. Sadly, it took the UN almost 3 years to put in place a funding support scheme, a time by which the peace movement was virtually extinct. By December 1997 all bi-communal meetings were banned by the Turkish Cypriot Authorities following the EU’s decision to postpone accession negotiations with Turkey (summit meeting in Luxembourg, December 1997).

Peace Initiatives between 1998 and 1999: Breaking the Communication Wall

Following the ban of all cross visits, Harry and Yiannis, pioneered in building bridges and supporting collaborations and friendships across the Green Line using technology. Already in July 1996, Yiannis Laouris, Mustafa Anlar, Lefteris Neoptolemou and Dervis Besimler all members of the Cyprus Conflict Resolution Trainers Group, planned and materialized an Internet Workshop for students[5]. Subsequently, in August 1997, Yiannis and Harry in coordination with their counterparts in the North, Dervis Besimler and Bekir Azgin, founded what the Tech4Peace portal. It should be noted that Cyprus was one of the last countries to connect to the Internet, partly because of a monopoly of the state-owned Telecommunications Company and partly because of the communications embargo imposed by the authorities. In 1997, a USAID grant ($12,000 for the Greek Cypriot side) to Dr. Hrach Gregorian of the Institute of World Affairs, who has been collaborating with the two sides of the Tech4Peace initiative, was used to purchase for two computers, in the South and four in the North, a server in the States, rent for space and internet fees for six months, and modest facilitators' remunerations. In July 1998 Technology for Peace held its first Internet Training Workshop in Nicosia, Cyprus, jointly organized by the Institute of World Affairs. The project offered the first bicommunal e-mail server and equipped peacebuilders with free and totally secured e-mails. The project has also hosted many meetings, implemented internet trainings and supported other initiatives. Later, it hosted pages for all initiatives.

Also in 1998, Yiannis and Harry have also tried to set up a non-profit bicommunal ISP node that, in collaboration with the Cyprus Development Bank, applied for European funds through the Cyprus Planning Bureau. Unfortunately, the initiative hit on the stubborn walls of the authorities. Characteristically, "the person in charge explained that for the project to be considered for funding, according to EU and UN guidelines, it had to be “purely” bi-communal. When we ensured him that it really was, he continued to explain that if it “really was bicommunal” then the government would do anything in its endeavor to stop it because it will constitute a violation of the embargo imposed against the North[6]." Neither the direct involvement nor support of the American Ambassador and the president of International World Affairs, nor our willingness to commit to 50% of the needed investment made any difference[7].

Peace Initiatives between 1999 and 2000: Breaking the ban of physical meetings

Following the ban of cross visits and the disruption of the peace movement, two of Future Worlds Center's projects played a significant role in breaking the impasse, Technology for Peace by using technology to facilitate communication and coordination, and Youth Promoting Peace. A tree Planting event, which took place in February 2000, was probably one of the first events ever organized in Pyla and therefore opened the door for more other events to follow. The group, which was facilitated by Yiannis Laouris, subsequently organized 23 mass events engaging thousands of young and adult people, enjoying significant visibility in the news. The impact and importance of these projects has been recognized also in an evaluation completed by Nathan Associates on May 25, 2004[8]. Both projects have scored high, but more importantly the impact of the organization's projects compared to the funds received has scored a "9," ranking behind only by The Management Centre that received a "10," and far ahead of the Cyprus Institute of Neurology and Genetics that received a "3" (see Table 6, pg. 37).

Peace Initiatives between 2001 and 2004: Breaking the ban of physical meetings

Future Worlds Center is a non-partisan organization, and as such it does not get involved in politically sensitive matters. Nevertheless, its pioneering activities in peace and reconciliation projects, along with its great success in envisioning, designing and securing funds to implement projects has been misunderstood by some. The organization and some of its people have been accused for "being paid by the US to buy souls" as multiple newspapers reported in a climate characterised by an author as as "περιρέουσα ατμόσφαιρα" (EN: The Ambient Atmosphere)[9]. Even though the UNDP/UNOPS provided a detailed analysis of all projects and organizations funded with respect to promoting the Annan Plan and Future Worlds Center was not included, the chair of the Board responded with both a Statement[10] and a letter to the Parliament's demand for submitting details and evidence of all funds received for the above purpose[11].

Peace Initiatives between 2005 and 2010: Opening up to the world

During the next 5 years, Future Worlds Center pioneered in more projects, focusing on three axes:

A comprehensive List of projects with a PEACE dimension is available.